In 2019, libraries have more to offer than books 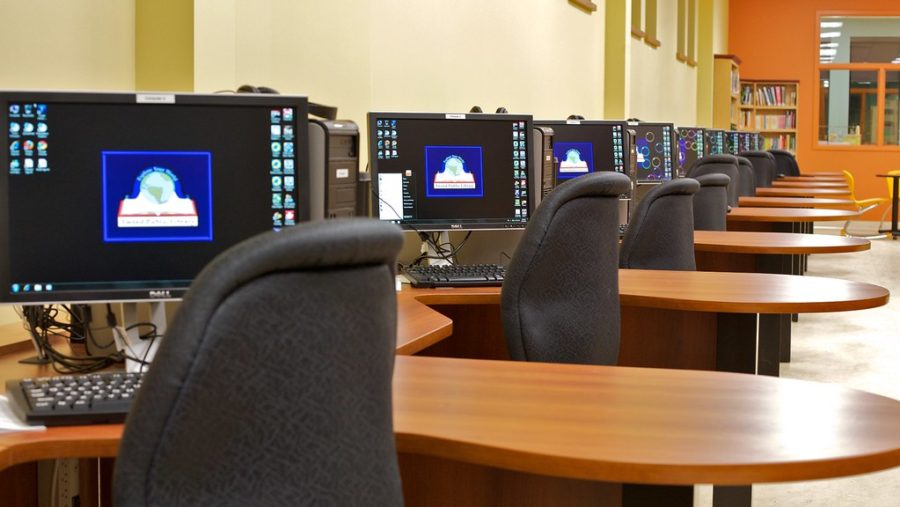 Libraries across the nation have adopted computers and other technology

Computer keys click rapidly and chatter fills the air. In an adjacent room, a basebeat pulses through a glass door. A vending machine rattles and a laptop pops noisily out of a slot. Somewhere, the shrieks and laughter of children echo.

Welcome to the Belmont Library.

The 21st century has given rise to the Internet, E-books, and social media. For the stereotypical library with dusty shelves and shushing librarians, this might have spelled the end. However, in recent years, many libraries have adapted to today’s society. One crucial adaptation has been integrating technology among the bookshelves.

“As a system, we tend to be very forward-thinking about technology,” said Kathleen Beasley, manager of the Belmont Library. “We view technology as a kind of literacy, and we give it the same importance as we do reading literacy. Without fundamental comfort with technology, it’s very, very hard to succeed in the world that we live in.”

The library is home to dozens of laptops and desktop computers, all accessible via library card. Embedded in the tables are outlets to plug in a personal computer or cell phone. In addition to free WiFi, the library also has a popular 3D printer for public use.

“We’ve got children as young as seven to older people in their 70s and 80s [using the 3D printer],” Beasley said. “There was an older woman who actually made a chess set. We’ve had inventors come and do prototypes.”

“If I’m ever without [my own] laptop, I usually use the library desktops, or if I need to print something out, I use the library,” said sophomore Alex Nickerson. “Everyone I know uses the library if we ever need a place for WiFi.”

School libraries have also utilized an abundance of technology. Sequoia High School recently underwent a renovation to transform their single-outlet library into a modern Media Center, which includes a computer lab.

“[We wanted] to be sure that we still very much included books,” said Sequoia library media specialist Betsy Snow. “And that we still added technology responsibly in a way that makes sense.”

The Sequoia Media Center has been met with positive response from the students.

“The look of it was so different that it was generally met with ‘oohs’ and ‘ahs,’” Snow said. 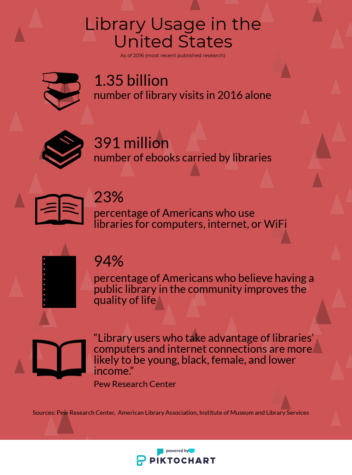 Tech is not the only thing libraries have to offer. Junior Antara Sengupta is the leader of Autism Buddies, a student-run program for children on the autism spectrum. The children participate in a weekly activity at the Belmont Library such as Legos, art, and games.

“The program is geared towards helping the kids work on skills such as sharing, communication, comprehension, developing confidence and responsiveness, and cognitive and fine motor skills,” Sengupta said.

“One program I definitely like is [on] the Sundays before finals week when the library is open late and provides food for high school students,” Nickerson said. “Last year, I participated in a high school short film event, and I’ve sat in on some senior citizen a cappella performances there as well.”

Despite these facilities, library attendance has gone down over the past decade. According to statistics from the California State Library, library visits have decreased in the past decade. There was only an average of 5.62 visits per capita of San Mateo County libraries in 2016-2017, compared to 8.64 in 2008-2009.

“There is a popular misconception that libraries are boring and solely meant for people who are interested in reading,” Sengupta said. “This is because most aren’t aware of all the programs and activities present at any given library, and the good ambiance it has for studying.”

According to Nickerson, the general opinion is that libraries are dull. However, he disagrees. “For the Belmont library at least, it’s the antithesis of dull, considering all of the programs it has going on and the fact that so many Carlmont students go there during the week.”

Though average attendance has gone down, the Belmont Library is still a common place to socialize. Study rooms allow students to spread out and collaborate, as well as play music and use large whiteboards. There is also a Social Computing Zone, where patrons commonly watch movies or play video games together. In the Teen Center, comfortable couches and chairs provide a space for teens to relax after school.

For many Americans, libraries are their only source of Internet access. For some, even, it is crucial to keeping themselves and their families healthy and safe.

In March, the Belmont Library hosted a self-defense class for women and girls in honor of Women’s History Month. Every fall, the library provides flu vaccinations. It serves as a polling station during election season, where the League of Women Voters and even Jackie Spears have come to speak.

“Offering that ability to enrich yourself and continue to grow and to continue to learn no matter what stage your life is in, I think that’s just crucial for democracy,” Beasley said.