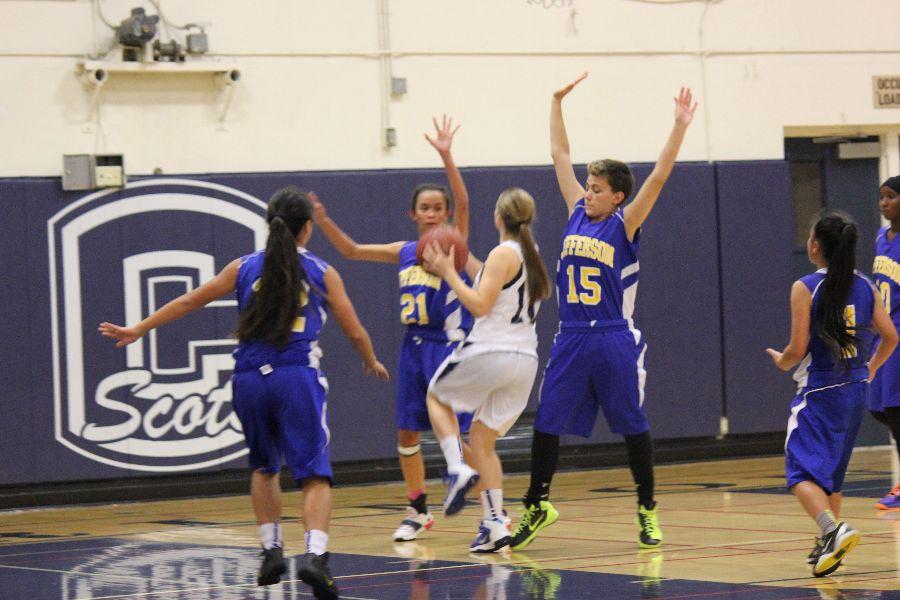 Junior Ahna Kay attempts to make a shot as Jefferson players press her.

The junior varsity (JV) Lady Scots were dominated by the Jefferson Indians on Wednesday, Dec. 10, ending the game with a final score of 37-25.

The game started off slow, but began to pick up in the last two minutes of the first quarter as sophomore Erin Wise made the Scots’ first basket. In the last two minutes, both teams worked fast to rebound and pull ahead. Despite Carlmont’s good offensive strategy, the quarter ended with a quick three-point rebound shot from the Indians,  leading 7-6.

Junior Teyva Chee said, “I don’t think we weren’t mentally focused on the game, especially with the stress of studying for finals. We lacked intensity.”

The Indians maintained their lead as the Scots were unable to defensively pull together. As the clock ticked down, junior Caitlin Caslow made two successful free throws. The Indians quickly rebounded with a three point shot in the last five seconds of the quarter, score 15-11.

“Even though we started off pretty slow, when we realized we had the potential to beat [Jefferson], we picked it up a little bit. [It still was] not enough to pull ahead a win,” said Caslow.

Despite the Scots strong comeback in the third quarter, Jefferson constantly pulled ahead as the Scots began to close in on them, trailing one basket behind. The Indians defended their lead as they offensively and defensively conquered the Scots. The quarter ended with a score of 24-18.

Caslow said, “I think one of our biggest weakness was not playing as a team. There were some players that tried their hardest and others that weren’t mentally there, so there wasn’t a lot of communication or energy, and that really effected how we did.”

The Scots were crushed by the Indians in the fourth quarter. Jefferson’s offensive strategies dominated the Scots as they made four successful shots, one after the other. Despite the Scots efforts to preserve against the Indians, Jefferson continued to pull ahead as the quarter progressed.

The quarter ended with a rebound shot from Carlmont after Jefferson swiftly ran down the court for an easy lay-up.  Jefferson executed successful offensive strategies as they made shot after shot.

Chee said, “We had a few players that really stepped up and tried their hardest throughout the game while the rest of us didn’t match their intensity, so their effort was wasted. Basketball is a team sport, in order to win we have to all have our head in the game and work together.”