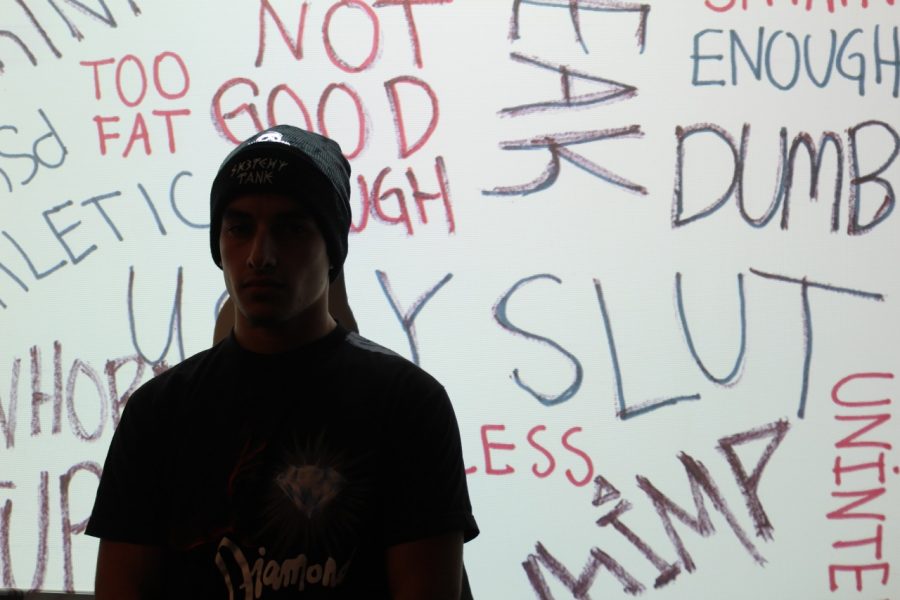 Many students in America feel these insecurities on a daily basis as they strive to reach the expectations governed by the media.

Society creates false pictures of what is normal. People compare themselves to others and manipulate the way they look or act creating an unrealistic view of who they are. Social media fails to show a wide range of what life is really like.

According to a 2012 study on hdbp.org, there is a high correlation between depression and the use of major social networks.

In society, it is difficult for someone to be his or her true self without fear of being judged and feelings of depression.

Freshman Iman Sarsour said, “We are constantly bombarded by images of women who are not only incredibly beautiful but who are also not a realistic depiction of the average woman today. These people that we see are paid to look that good. It is their profession.”

Sarsour sees media as manipulative of what people of society might want such as beauty.

“Girls often think that that is what they should look like when they wake up in the morning; when in reality, these women spend hours working out and doing their makeup. The media shows you ‘beauty’ and by nature, people want it,” said Sarsour.

Society has ways that allow people to judge one another anonymously. Some people believe that this creates harsh expectations and immense pressures both socially and academically, specifically among teenagers.

Due to widespread use social media among teenagers, such as Instagram, Facebook, Twitter, and Snapchat, they are exposed to critiques and words that provoke such judgment.

Sophomore Ayana Johnston said, “We have all of this false advertising and Photoshopping that doesn’t truly show who we are. It would be the more desirable version of them.”

Sophomore Anika Furgan deals with insecurities due to false advertising daily and finds it difficult to cope with.

Furgan said, “My biggest insecurities are my acne and my stomach. Society wants a girl to have clear skin, a flat stomach, big boobs…it’s hard to keep up with the trend because it’s constantly changing.”

Many students have been called ugly at one point of their life, and many currently have or have had at least one significant insecurity.

Girls often have insecurities relating to their physical appearances, particularly their weight, their “bare face,” and their race.

According to dosomething.org, over 70 percent of girls ages 15 to 17 avoid normal daily activities, such as attending school, when they feel bad about their looks.

Other insecurities include academic performance, family stability, and personality.

Amany Othman, a junior, said, “One of my biggest insecurities is how I look. I have never been pleased with my weight or in general, my face or body.”

Othman believes that society as a whole is to blame for how she feels about herself.

“I do believe society has a large effect on that. I compare myself to those around me and those I don’t even know just because society has brainwashed us all that we need to be super skinny, but thick in some places, but not too thick. And we should look good, but we shouldn’t wear too much makeup. Society has such high and low standards that it messes with how we all see each other,” said Othman.

Society puts an image on how a person is supposed to look. Some people will do anything to reach the specific standards. This includes working hard for acceptable grades.

Tara Dezham, a junior, said, “I can say my biggest insecurity is doubting myself about my grades.”

The media also creates academic pressures by showing what is specifically needed in order to be successful, both in school and in general, life.

Many boys were insecure about their size and height, their masculinity, and their academic performance.

Earl Kwofie, a junior, said, “People try to tear you down, make you feel ugly because they got stuff going on in their personal life. It’s messed up.”

Sophomore Thomas Slayton said, “People try to exploit others insecurities to feel better about theirs.”

Boys in today’s society are expected to show different aspects of masculinity, which means that they can’t be open about their feelings or thoughts with others. Otherwise, they would be considered as weak or feminine.

According to notgoodenough.com, research shows that by age 7, more than 50 percent of boys desire to have a more muscular body, a percentage which increases to around 90 percent through adolescence.”

John Tan, a junior, said, “A lot of guys talk about masculinity and they’re afraid to be portrayed as weak. It’s difficult to express who you are because so many people judge. I also generally just don’t like to tell people my feelings because I don’t want to feel like a burden.”

Both boys and girls struggle to reach what is accepted in modern-day society, and social media has made a significant contribution to this struggle.

Jacob Lloyd, a senior, said, “Realistically, men compare themselves just as much as women do.”