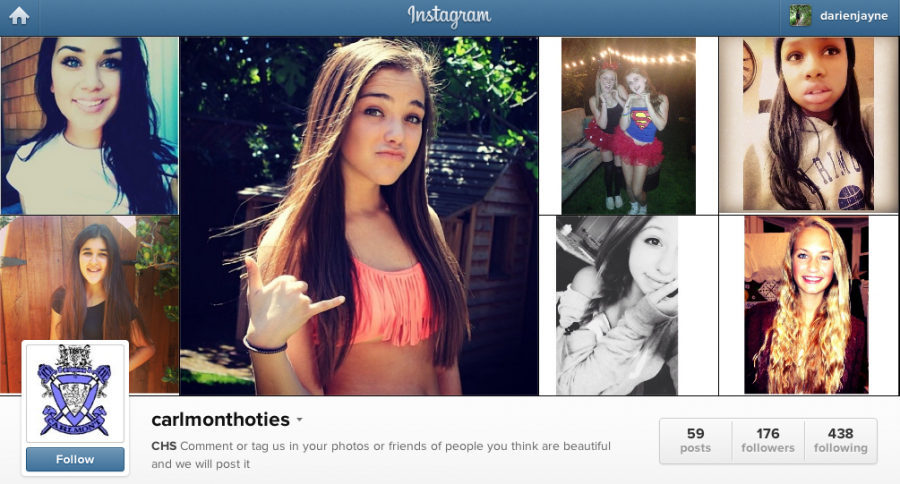 Anyone can visit Carlmonthotie's homepage.

In the past week, a profile under the title “Carlmonthoties” (sic) has created an Instagram account in which pictures of various Carlmont students are posted.

The owner of the account is anonymous, but anyone can tag any picture of a Carlmont student and have it featured on the account.

Senior James Schulte said, “I think it’s sad. I think it’s probably two or three girls on one account. I’m sure it’s a girl. I’m positive. It’s just sad that this is what they need to do to boost their confidence.”

Schulte’s view was common among others, who agreed with Schulte’s description of the account being a “popularity contest.”

Senior Belal Kaddoura agreed with Schulte when he said, “It is a popularity contest because there are a lot of students who aren’t as well known who aren’t posted on it regardless of how they rank on the hottie-meter.”

However, other students disagree. Senior Melissa Wood said, “I don’t think it matters for anything. It’s just supposed to be a fun thing.”

Popularity contest or not, the account’s connection to Carlmont has made some students wary. Wood said, “It’s a little inappropriate because it shouldn’t be publicized what everyone thinks of someone at a school. It could make others feel bad about themselves.”

Some students thought that the account itself is not inappropriate, but it’s relation to Carlmont is. Kaddoura said, “I don’t think it’s appropriate to tag with the school. Maybe the name should be ‘San Mateo County Hotties’ or something. I don’t think it’s very relevant to put ‘Carlmont’ in the tag with it because most of the pictures aren’t even taken at Carlmont and don’t represent the school in any way, shape, or form.”

The account is only three days old but already has 59 posts and 179 followers, large amounts for such a short-lived profile. Whether or not the profile should be connected to Carlmont, it is clear that the students have been enjoying it quite a bit.