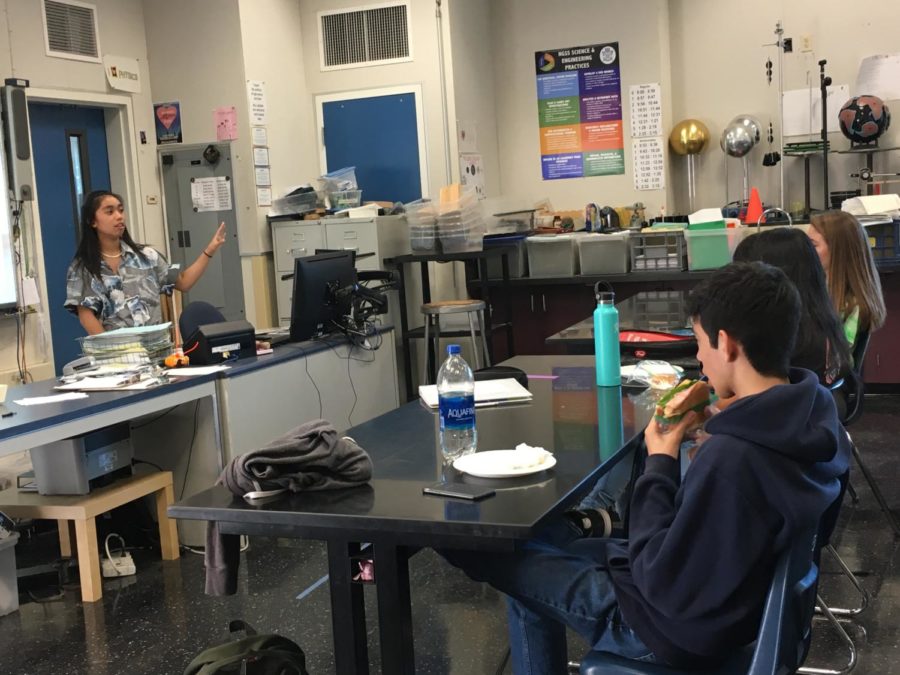 For Interact Club, volunteering in the community and meeting new people go hand in hand.

The club leaders encourage service work, while also emphasizing the importance of giving back to the community.

“We are a community service club,” said TJ Rodriguez, a junior and one of the vice presidents. “Our main goal is to give back to the community we live in and to make friendships along the way. ”

While working on and planning their events, the Interact Club collaborates with other clubs and groups, such as the Rotary Club.

“We base our volunteering off of Rotary Club and the events that they do in San Carlos,” said club president Jackie Maerina, a junior.

Some of the events that the Interact Club participated in include volunteering at the Waterdog Run, and participating in the Lobster Feed, where members got to experience the work of waiters and waitresses.

According to Rodriguez, the club’s goal is to give back to the community and make friendships along the way.

“We mostly participate in volunteering and community service, along with having a lot of fundraising,” Maerina said. “We might also incorporate something else into that.”

The Interact Club is not the only club at Carlmont that participates in volunteer works. Other clubs, such as Key Club, also attract members around the campus.

However, Key Club and Interact Club have some differences. According to Maerina, Key Club is more project based, while Interact Club participates in more volunteer opportunities.

The club meetings, which take place every Wednesday in A-10, often include going through the agenda and planning future events, most of which relate to volunteer work and community service.

“During meetings, we usually go through the agenda and discuss events,” Rodriguez said. “We have a wide range of volunteer opportunities and we figure out who can make it to the event.”

The club leaders try to provide the members with volunteer opportunities at least once a month. Though participation at these events is not required, it is preferred.

“We don’t require you to volunteer and be present at every event, but we would like you to be there whenever you can,” Rodriguez said.

During their most recent meeting, members and leaders took some time to brainstorm ideas for possible fundraisers in hopes of raising money to get club T-shirts.

“We are planning to sell boba tea after school,” Maerina said. “We are still deciding on the details such as date and flavors, though.”

Overall, the Interact Club allows students to participate in volunteering and community service events, along with providing other benefits.

According to Rodriguez, members of the club can get scholarships to a leadership camp called Rotary Youth Leadership Academy (RYLA).

Interact Club members who are actively participating in the club are eligible to get a scholarship from the Rotary Club. The scholarship would allow members to spend the money in order to make the community or themselves better.

In addition to the existing members, new members have found the club beneficial and helpful. According to Maerina, the club allows its members to meet new people, in addition to learning new things through experiencing them.

“I think that the club is awesome,” said Kya Whiting, a freshman. “I really like it because it allows teens to find opportunities to help out and participate in the community.”