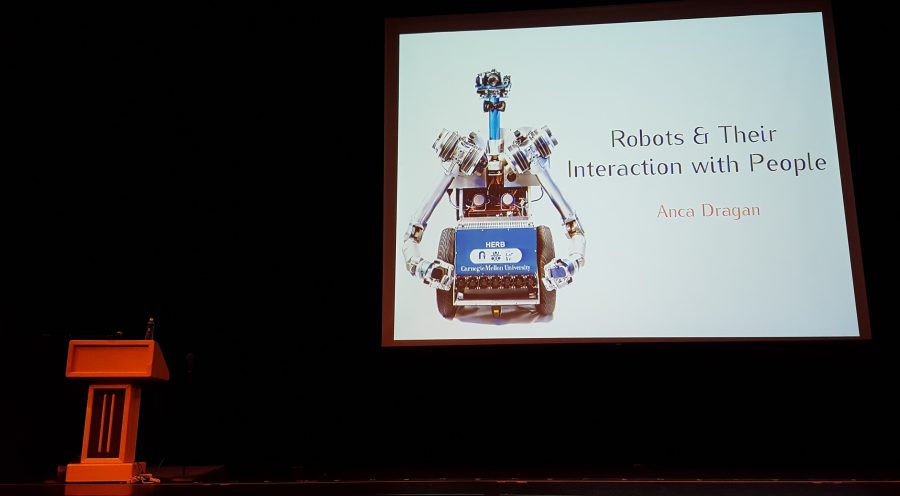 UC Berkeley Assistant Professor Anca Dragan spoke to the Carlmont community about the ideas and functions of robotics as well as discussing current and in-progress artificial intelligence designs.

“I’ve been told that during these lectures, often you sit there and listen to the speaker. Tonight will not be like that,” said UC Berkeley Assistant Professor Anca Dragan to the the crowd in the Carlmont Performing Arts Center.

On the night of April 13, the Carlmont Science Department invited Dragan to speak at the final science lecture of the year. Dragan is part of the Electrical Engineering & Computer Sciences department at UC Berkeley, and spoke on artificial intelligence of robots and their interaction with people.

Dragan stylized her lecture to be very interactive with the audience, asking many questions for the audience to think about and answer.

“Ms. Dragan introduced some advanced concepts by posing questions to the audience and following the logic as if we were a decision-making robot, which allowed us to understand the difficulty of constructing robot control algorithms,” said senior Matthew Trost. “She also referenced numerous real-world robots to give us a sense of where the industry now stands in terms of both R&D and deployed systems. I thought the speaker and lecture were excellent.”

Dragan began the lecture by asking the audience to give definitions of what a robot really is. Many students offered ideas that Dragan discussed in further detail.

“A robot has artificial intelligence in that it can respond to its environment and make decisions to achieve its objectives,” said Dragan. “Robots also need to have a physical embodiment. Siri and AlphaGo are not robots because they do not have this. Washing machines can be seen as robots because we give it an objective and it carries out the details without us specifying them.”

However, Dragan highlighted the fact that there is truly no clear definition of what a robot is, other than the requirement for it to have a physical embodiment. Examples such as the washing machine can be arguably seen as robots, but are not necessarily categorized as robots by the scientific field as a whole.

Another key point that Dragan highlighted was that most current robots are still in research labs, not in common usage. She again opened the lecture up to the audience by posing the question, “What is research?”

Several students responded with a variety of ideas, displaying the significant student engagement that pervaded the lecture. Dragan’s final definition included many of the student responses, culminating in the explanation of “systematic investigation and study of open problems. Open problems are ones that humanity does not have a solution for yet.”

After defining terms like robot and research, as well as discussing examples of robots with the audience, Dragan talked about her own work on a robot called HERB (Home Exploring Robot Butler) during her work on her PhD in robotics at Carnegie Mellon University.

This latter part of the lecture focused on the ideas of the basic building blocks of what a robot is and how one navigates and evaluates situations. Dragan explored general ideas of how robots function in planning and navigating movement as well as getting into specifics such as how derivatives could be utilized in planning as well as how many dimensions different kind of robots need to consider to navigate.

“I read her research paper before the talk and I felt like she [Dragan] had too many things to talk about and didn’t get to all of it, but what she did say was cool,” said junior Ajia Grant. “The interactive part of how she lectured was interesting, but it did cut into her time to talk to us.”

Artificial intelligence is a field that is progressing, as demonstrated by Dragan’s numerous examples of robots in the research and development stage.

“I became interested in this field in my senior year of high school after reading a book called ‘Artificial Intelligence: A Modern Approach,'” said Dragan. “I had already done some computer programming, but the difference between using already-created algorithms and creating new ones was what drew me to artificial intelligence.”

As the final science lecturer of the school year, Dragan educated her audience and kept them engaged throughout the night on the general ideas as well as specific details of robotics and artificial intelligence designs in usage today and in store for the future.