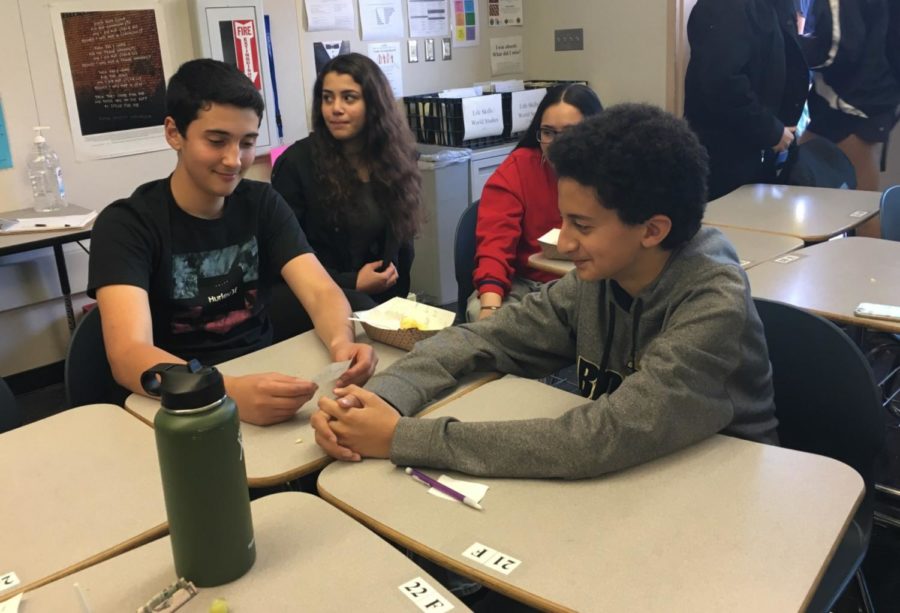 Brightly colored cupcakes and the promise of food and games drew students to the interfaith potluck hosted by Jewish, Christian, and Muslim Fellowship Clubs.

The presidents of the three main religious clubs at Carlmont encouraged students to meet others with beliefs similar or different than their own on Thursday, Nov. 8 in D7. After students had settled into groups, the presidents asked them to form new groups and reach out to others they had not met before.

Iman Sarsour, a junior and president of Muslim Fellowship Club, explained the importance of bringing the three clubs together.

“Often times we kind of stick with our own group, when in reality we have a lot in common with a lot of other people,” Sarsour said.

The turnout for the potluck was around 30 people, with students that ranged from freshmen to seniors. When asked about why the potluck was so important, most students had a similar response: unity and diversity.

Ahmad Muneeb Fallaha, a sophomore, said, “I wanted to attend the potluck because I wanted to get to know other people in other religious clubs.”

Other students wanted to help introduce and expose others on campus to their religion.

“I want to help other people on campus learn about Christianity,” said Diane Ji, a junior. Ji also said that her group of friends and herself wanted to show people that Christians were not unaccepting of others.

Sitting in the same table group, Grace Xu, a freshman, added, “There is still not a great relationship between society, social media, and religion; it still portrays a lot of hate.”

The president of Jewish Club, Victoria Tsinker, a senior, explained the goal of the potluck.

She said, “We thought it would be a good bonding experience for all of the members of the Muslim, Christian and Jewish clubs that would allow them to get to know each other and create a supportive community.”

Most students at the potluck were Muslim, Christian, or Jewish. One student, sophomore Saylor Reinders, is not Jewish but is a part of Jewish Club.

Reinders said, “I’m not Jewish, but I like to learn about other cultures and religions and about how other people celebrate life.”

With the majority of students at the potluck sharing and even working towards her goal, Tsinker expressed what she hopes everyone will take away from the potluck.

Tinker said, “Everyone should come to realize that they are all the same, and they can be friends with everyone. You can bond with others regardless of your ethnicity or your religion.”