Iranians deal with the effects of Trump’s actions 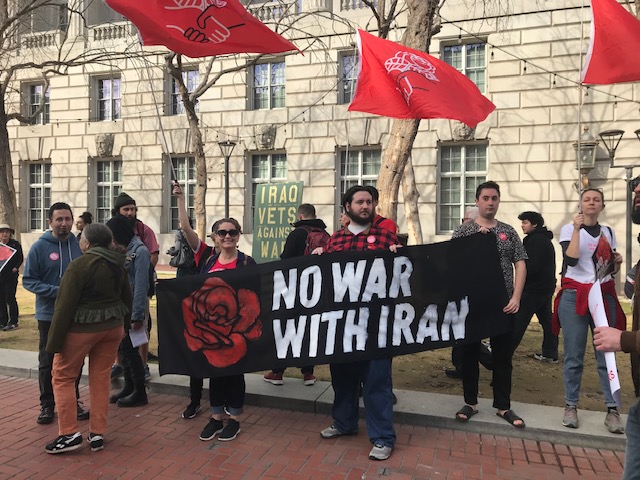 Anti-war protesters join hundreds of others in the streets of San Francisco. After an emergency call to action by Bay Area activists, over 300 people showed their solidarity with the Iranian people.

When Farhad Farnia hears his country’s name in news headlines, it never has to do with its 24 UNESCO World Heritage sites, over 4000 years of rich history, or its diverse cuisine.

Farhad Farnia is a chef, grandfather, and one of 1 million Iranians living in the United States. He moved to Oklahoma City in 1976 to escape the hostility in his home country but he and his family have faced a new form of aggression: racism.

“People did small things,” Farhad Farnia said. “All of our neighbors put up American flags when they found out their neighbors were not white people. It was alright until the hostage situation — that’s when everyone started hating Iranian people.”

Farhad Farnia’s daughter, Nina Farnia, is the former president of the Bay Area chapter of the National Lawyers Guild (NLG) and a current member. She explained a memorable experience from growing up Iranian.

“I was in fifth grade when the first gulf war started. In front of the whole class, she asked me what my parents thought about the U.S. going to war. I said my parents don’t support it because they don’t think that it’s right for one country to invade another. And then she told me that Kuwait asked us to go to war, and I remember, tears welled up in my eyes,” Nina Farnia said.

Iranians have been singled out and consistently viewed as dangerous by the U.S. government since the 1950s when the U.S. first got involved with the country. Hate crimes against Iranians increased by 1600% after the 9/11 terrorist attacks and have not dropped since. But things took a turn for the worse on Jan. 3, 2020 when Qasem Soleimani, Iran’s top military official, was killed by the United States.

Kian K is a youth activist who prefers to only use his first name for fear that his university will discriminate against him for his political work. He explained the effects of Trump’s threats of nuclear war on Iranians around the world.

“My family back home is scared of nuclear war. Even though Trump has backed down a little bit with his threats, we are still scared that people will get killed,” Kian said.

While millions of adults around the world fear for their lives, Iran has been a trending topic on social media sites Twitter and Tik Tok. Though a third world war now seems unlikely, hundreds of thousands of American youth have joked about a fake draft and killing Iranians abroad. But for millions of Iranian youth, war and destruction are more than a meme.

“There’s a pretty deep kind of insensitivity and sort of like callousness that underlie all that,” Kian said. “There is so much privilege that comes with the ability to joke about getting drafted. Meanwhile, my family is facing economic warfare.”

By economic warfare, Kian means the heavy economic sanctions put on Iran as an immediate response to Iran’s threats back to the U.S. Nina Farnia explained how the majority of the country’s 82 million people are affected.

“Now, it’s nearly impossible to buy many foods that are central to the Iranian diet,” she said. “Inflation rates are so severe that if you went to sleep with $100,000 in your bank account, you would wake up with $30,000.”

In response to U.S. intervention in Iran, there have been protests in over 70 cities across the U.S. Kian attended the protest in San Francisco and explained the goals of his work.

“Basically, we’ve been mobilizing members of the anti-war movement against what’s going on right now,” Kian said. “We marched through Market Street, the financial center of San Francisco, mainly to bring awareness to the fact that war is not okay.”

And while shutting down the streets brings the attention of Americans to war crimes, Farhad Farnia believes these protests have a positive impact on Iranians worldwide.

Despite the tweets and Tik Tok videos joking about killing Iranians and  increased screening for Iranian immigrants, Farhad Farnia believes the American people as a whole are becoming more accepting and open-minded.

“Right now is totally different than the ’60s, ’70s, and ’80s,” Farhad Farnia said. “Everywhere is more diverse, especially the Bay Area, so people are seeing people that are different. Now, a lot of people know about Iran and I think this country is safer for the youth.”