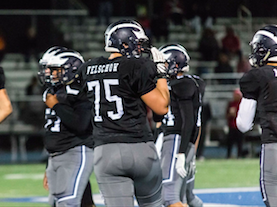 Jackson Velschow (#75) talks to his teammates during a timeout against Mills on the last game of the 2017 season.

Six percent of high school football seniors will play in college, according to CBS news.

Jackson Velschow, a senior, has played the offensive line for Carlmont in past years and is going to Portland State. Jackson Velschow is part of the six percent.

When it was time for the seniors to commit to a college, Velschow wanted to make sure he goes somewhere where he can play football because it’s the sport he has grown to love.

“I’m always happiest when I’m playing sports and getting to let out my aggression and energy. I couldn’t see myself doing anything else with my time in college than playing football,” Velschow said.

Velschow had an important role on Carlmont’s varsity football team, which had eight wins in ten games this year, their best single-season record since before 2004 (according to MaxPreps).

“Jackson had a few, very different impacts for the team this year. He had this ability where he made things simple for everyone else, but he was still fun and competitive when he was on the field. Without him, the outcome of our season would have been different,” said Henry Reich, a senior. Reich was a quarterback and kicker for the football team in 2017.

Along those lines, one of the biggest reasons for the team’s success this year was the team chemistry. For example, in the last game of the season against Mills High School, Velschow had been hit by a Mills player after the whistle was blown out of aggression, and all of Velschow’s teammates supported him.

“That last game against Mills was easily the highlight of the year. It signified how our team had grown over time because my teammates had my back which I am not sure would have been the case in previous seasons. We didn’t have that same aggression and swagger that we played with this season,” Velschow said.

It was due to moments like this, along with other memories, that Velschow knew he couldn’t walk away from football in college.

However, Velschow isn’t the typical college sports athlete. He didn’t start playing football his until his freshman year. Typically, elite athletes have played their particular sports for their entire life, but Velschow only started four years ago.

Velschow also believes that going to the best athletic schools doesn’t matter if one wants to be scouted or become better. Many people in the Bay Area who want to develop themselves as athletes go to private schools such as Serra, because of their rich history and the big names who went there like Barry Bonds and Tom Brady. One can still be looked at and still play sports at the collegiate level without doing this.

Famous athletes like Stephen Curry, who is a two-time MVP in the NBA, went to Davidson College, which has never been considered an elite athletic college. He got denied from schools like Duke and North Carolina, who have histories of being the best college basketball programs. He was still able to become successful going to a lesser known college.

“When you have a great coach like we did, who puts the team through a great weight lifting program and has connections with college coaches, there is no need to go to a private school,” Velschow said.

Velschow sees football has a big part of his future even further down the line.

He said, “In about five years, I look to have graduated college and hope to continue having football part of my life, either by playing or coaching it.”