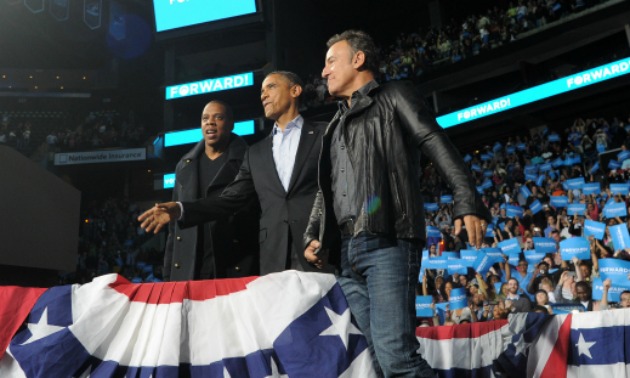 Jay Z and Springsteen with Obama

The exciting finish to the presidential race may very well overshadow the pop culture landmark that occurred on Nov 5.

Jay Z performed a reworked version of ’99 Problems’ for Ohio voters, replacing a certain expletive with “Mitt,” in and of itself a moment fit for a statue or monument of some kind, and provided the Obama campaign with the grand finish it needed.

Senior Merouane Ounadjela said of Jay Z’s performance, “It would have been a pretty boring end to the whole ordeal without something big like this. Jay Z campaigning for Obama is awesome, and he killed it which makes it even better.”

Springsteen performed the song he wrote specifically for the campaign, ‘Forward and Away We Go,’ to the crowd already in awe from seeing The Boss perform ‘No Surrender’ and ‘Land of Hope and Dreams.’

A-List support has been an ever-present in Obama’s campaign. In a campaign with an unprecedented amount of pop culture strewn in, with Obama doing a Reddit AMA and Romney becoming the subject of more than his fair share of memes, the night’s two acts signalled the shift to appeal to the younger generation obsessed with music and connecting with each other over whatever is the “happening” thing at the moment.

Four more years will see this shift go even further, and although its effect on presidential campaigns has not yet been fully seen, two bona fide legends rocked Ohio on Nov. 5 and more of that energy in popular campaigning is sure to engage more young people in political affairs.