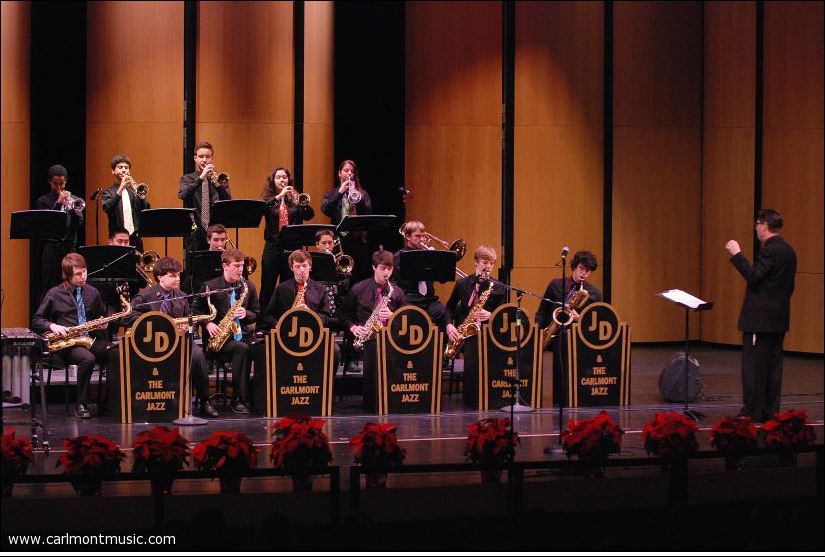 Jazz itself is a fluid, improvised entity more open to creativity and interpretation than any other form of music. Its distinct character is reflected in the unique nature of the Carlmont Jazz Ensemble.

“One of the things that makes jazz band unique from other classes is that everyone is in the class because they want to be, not because they need a graduation requirement or course for college credit,” said senior Christina Galisatus. “This allows for a class full of people who are passionate about the same thing.”

Galisatus is among several of the current ensemble’s members who have been in the program for all four years of high school. Senior Adam Cobb is also one of these members.

“My favorite thing about Jazz Ensemble is that being the small, more intimate group that we are, we get to know and support each other,” said Cobb. “It’s an amazing experience to be part of a performance in which you can feel the vibe and all of the performers are truly passionate about what they’re playing.”

Jazz Ensemble is the smallest group in the Carlmont music program, with only 20 members enrolled in the current school year. It follows a traditional “Big Band” style in its instrumentation and performs a wide variety of different jazz literature including swing, funk, ballad, blues, and samba. The ensemble is intended to cultivate the perception, responsibility, and awareness of musical culture as well as the actual musical ability and musicianship of each member.

Junior Bobby Goldie, a new member in Jazz Ensemble this year, said, “It feels very rewarding to practice and perform with this group considering all the practice time and effort that went into my audition last February. While I was nervous about playing with such a high caliber band at first, I have found the Jazz Band very accepting and encouraging, creating a comfortable environment to play music together.”

Jazz Ensemble goes to many events throughout the year such as the local Save the Music Festival, the College of San Mateo Jazz Festival, California Music Educator’s Association Jazz Festival West, and the Santa Cruz Jazz Festival.

“The amount of time we spend together rehearsing and playing at festivals allows us to form a tightly knit group that betters the experience for everyone,” said Galisatus.

The level of repertoire, expected musical accomplishment and limited spots result in the Jazz Ensemble being one of the most advanced musical groups on campus. Students in all grades are allowed to be in the band, and every member is privately auditioned by band director John DaBaldo.

“At the end of the year, we are such a tightly knit group and get along really well, and you can hear it in our playing,” said senior Kaelen Ghandi. “Jazz band is fun, and it pulls people of all walks of life together to become the best of friends by sharing music together.”