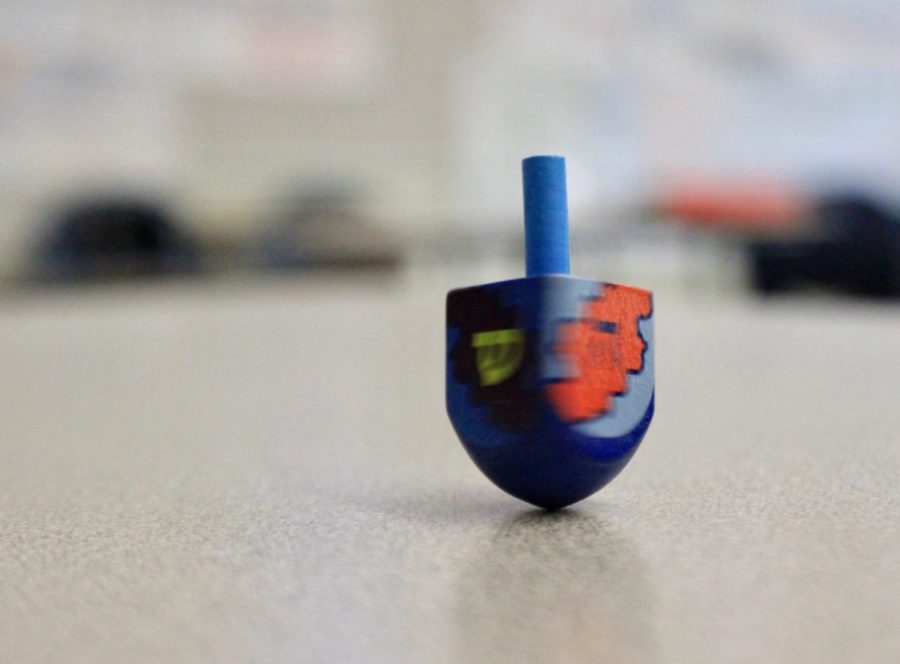 During the holidays, small string lights cover houses all throughout the Bay Area. Many are Christmas lights, twinkling red, white, and green.

However, some are Hanukkah decorations, twinkling blue and white.

Jewish Club met on Friday, Dec. 7 to celebrate the sixth day of Hanukkah. Members of the club made dreidels out of candy, danced to popular Jewish songs, and played dreidel.

According to History, Hanukkah is an eight-day celebration that pays homage to the rededication of the Second Temple in Jerusalem.

The story of Hanukkah begins around 200 B.C. when Judea was ruled by Antiochus III, the Seleucid king of Syria, who let the Jews freely practice their religion. However, his son Antiochus IV forced the Jews to worship the Greek gods.

In 168 B.C., the Seleucid army attacked Jerusalem and massacred thousands of people. Antiochus IV then erected an altar to Zeus in the Second Temple, a holy space for Jews.

Led by Jewish priest Mattathias and his five sons, the Jews rebelled. When Mattathias died, his son Judea drove the Syrians out of Jerusalem. Then he urged his followers to rebuild the altar and light the menorah.

There are many stories as to how the celebration of Hanukkah came to be, but according to the Talmud, inspiration for the holiday comes from when Judea and his followers witnessed a miracle. When the menorah was lit, there only was enough oil to burn for one day. However, the oil burned for 8 nights, giving them time to find more fuel.

Though there are different versions of the history of Hanukkah, many Jews celebrate the holiday similarly.

Sophomore Lilly Rozansky said, “I celebrate Hanukkah by getting together with my family every single night. We light the candles and sing prayers. We just have a good time and enjoy each other’s company.”

Other members of Jewish Club also celebrate in similar ways, through food, lighting candles, and gathering their family.

“I usually light the hanukiah with my family, and we give each other presents,” said Sophie Oestreich, a sophomore.

Oestreich said that she has been trying to convince her mom to buy a Hanukkah bush as many stores are now selling Hanukkah ornaments.

“It is just a Christmas tree, but we call it a Hanukkah bush,” Oestreich said.

Oestreich also said that she decorates her house with lights. The lights look like Christmas lights, but the bulbs are shaped like dreidels.

Brandon Dompier-Norrbom, a senior, celebrates Hanukkah but said that his family doesn’t do anything crazy.

“I think Hanukkah is important, but honestly, I feel like it is kind of commercialized because it is around Christmas,” Dompier-Norrbom said.

Cynthia Shusterman, a teacher at Carlmont, also recognizes that some nights Hanukkah can be very gift-oriented.

“Sometimes it can just be light the candle, say a prayer, and open a present. It can be very quick, like ten minutes, so I try to make it more of a special event. My family will talk about things we are thankful for and happy about so it has a purpose,” Shusterman said.

Though Oestreich appreciates getting presents, she acknowledges the other aspect of Hanukkah.

“In America, Hanukkah makes you feel like part of the holiday season, but there still is a lot of focus on being with family and being together,” Oestreich said.