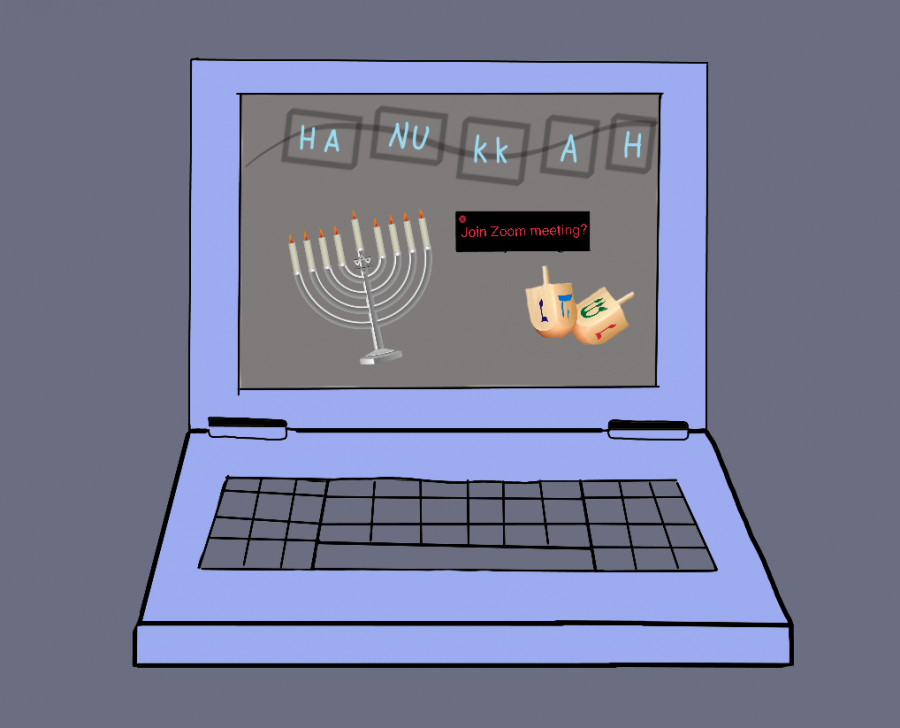 The Jewish Club celebrated their Hanukkah party online this year due to the ongoing pandemic.

It is no secret that holidays look very different this year, with the ongoing pandemic and COVID-19 restrictions. The way holidays are celebrated will have to change along with the environment, in this case, socially-distanced.

As the holiday season begins, Carlmont’s Jewish Club held their annual Hanukkah Party over Zoom to celebrate the beginning of the holiday. The party took place on Wednesday, Dec. 9, at 2 p.m., the day before the first night of Hanukkah.

Although traditional activities like playing the dreidel game or having an in-person gettogether were not possible with the virtual meeting, the club officers worked hard to create a fun party.

In previous years the party consisted of food, music, and games, which remained the same this year, just on a virtual platform.

“This year, we are keeping it lowkey and doing some online activities. We will be doing a Kahoot, and Hannukah themed skibbl.io. We will also be sending out Hannukah recipes like latkes and jelly donuts for people to make beforehand to make it a bit more festive. We will also be playing Hanukkah music to set the vibe,” said Lilly Rozansky, one of the Club’s vice presidents.

Latkes are a traditional Hanukkah dish made of fried potato pancakes, and on Hanukkah, it’s tradition to serve them fried in oil to celebrate the miracle of the holiday.

The club event was designed as a way for the Jewish Club community to celebrate together, and it was a success. Many club members attended, as well as staff members, including Mr. Crame, Carlmont’s principal.

“We had a lot of staff join, and definitely felt the love and support through the screen. Felt almost normal,” said Elizabeth Gurevich, the president of the Jewish Club.

The Jewish Club’s virtual celebration serves as an example of how the holiday season and celebrations can adapt this year. The successful party also shows that celebrating holidays with friends and family is possible with virtual meetups and activities.

“Hopefully people will adapt to the circumstances. Obviously, many people tried to with Thanksgiving. But that wasn’t the case, and we saw cases spiked. So hopefully, people will be safe and responsible through a lot of virtual dinners and candle lighting.” said Kasey Parks, the vice president of the Jewish Club.