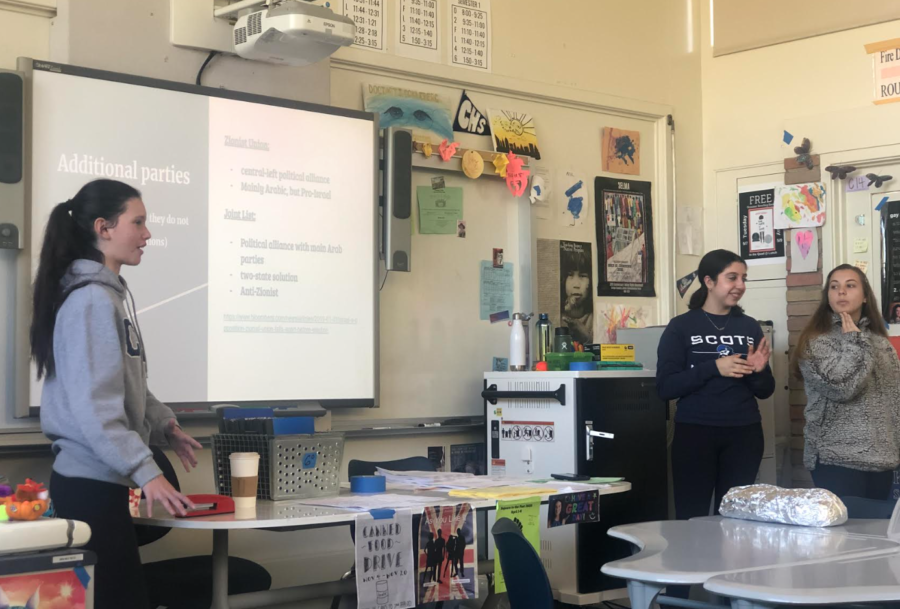 Members of the Jewish Club share a presentation concerning the election in Israel.

Religion is a sensitive topic to touch on. Due to the different views and opinions based on the subject, it is adequately discussed. High school students have reached the age where they are able to formulate their own thoughts and ideas surrounding different beliefs. Jewish Club offers a space for mainly Jews, yet all people of differing viewpoints are welcomed.

The club meets every second and fourth Friday of the month. Usually, a guest speaker either gives a speech or leads discussions about the history, religious holidays, or the current events of the Jewish culture. Students learn about the present-day conflicts in Israel and talk about feeling safe and comfortable with their beliefs.

Liz Gurevich, a junior, and now the president of the club, wanted to join in raising awareness to the Jewish students on campus.

“It leaves behind an impact on the Carlmont community; the purpose is to create a safe and happy place for all Jews who feel any sense of discomfort or want to learn more about their identities and culture,” Gurevich said.

However, the Jewish Club is not only for students who are Jewish. Students who are atheists also join the club to learn more about Jewish traditions.

“It is a great opportunity for students that are interested in Judaism to come and connect with more people through possible similarities or other interests,” said Aderet Barak, a freshman and member of the club.

Some components that Jewish Club members are looking forward to are Hanukkah and the Heritage Fair.

“I am so excited for the Hanukkah party because I can’t wait for all the students to get to know each other even better and greet finals week. I am also excited for the Heritage Fair as my vice presidents and I have been working on some wonderful ideas to share with the student government,” Gurevich said.

Jewish Club members have been spending the majority of their time planning special events. A guest speaker will be joining an upcoming club meeting, and operations with organizations have been set off.

“We have a guest speaker coming from a Jewish organization who will speak about social change and social justice. We also have been working with Fortifying Bridges to do an interfaith event,” Gurevich said.

With the club’s continuously successful meetings, Shusterman expressed her goals regarding its future.

“I would say that it’s important to address some of the ignorance associated with the Jewish faith to make sure that people aren’t engaging in stereotypes or believing in them. Overall, the club is very welcoming, open, safe, informational, and has lots of delicious food,” Shusterman said.