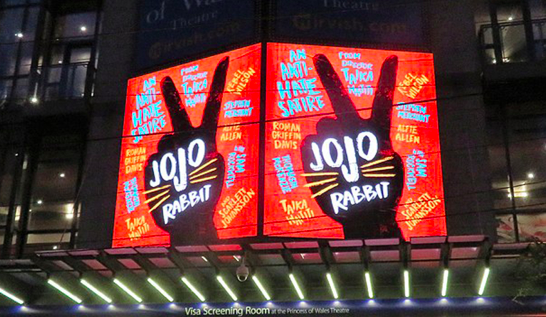 In the World War 2 blockbuster “Jojo Rabbit,” Taika Watiti is able to create a comedic masterpiece out of a serious situation in Nazi Germany.

The plot follows Jojo Betzler, a young German boy obsessed with one day becoming a Nazi soldier, and his imaginary friend, Adolf Hitler. Jojo, played by Roman Griffin Davis, discovers a Jewish girl hidden in his attic. He struggles between Nazi ideals that say she is evil and his morals that suggest she is just like him.

The first area where this film excels is in its characters. Davis perfectly plays the role of a confused child who doesn’t know what the right choice is. The Jewish girl he finds, played by Thomasin McKenzie, sells to the viewer that she is a scared teenager while also being proud of her Jewish heritage. Jojo’s imaginary friend, Adolf Hitler, played by Waititi, is the polar opposite of, well, Hitler.

Waititi is the creative mastermind behind the film, both as an actor and director. He filled both roles with the same charismatic energy. Marvel fans might recognize him as the director of “Thor: Ragnarok” and will see the similarities in the humor between the two movies.

In “Jojo Rabbit,” the viewer never sees the real Hitler, just the one in Jojo’s mind. Waititi is careful with his jokes around Hitler, always making jokes at his expense rather than the other characters’.

However, one character doesn’t seem to fit with the rest. Rosie Betzler, played by Scarlett Johansson, is Jojo’s only parent. As his mother, she motivates Jojo to be a better person and to break away from his dreams of being a Nazi.

Jojo already looked like he would make that decision without Rosie, making her role in the film feel unnecessary. Considering how her character arc ends, and the release date of the film, her character feels just a little too much like Oscar bait.

Oscar bait is when an actor plays a character to win an award because the role attracts them. In this instance, she seemed to be targeting the Oscar for Best Supporting Actress, a nomination she would later receive. Unfortunately, Johansson failed to take home the award, possibly due to her jokes often falling flat in what is supposed to be a comedy.

Aside from her character, the jokes throughout the rest of the movie are outstanding. Saying that a joke about the Holocaust or Jews dying is in poor taste is an understatement. By centering his jokes around the eccentric characters and their personalities instead of the darker parts of those events, Waititi creates a safe environment in which viewers can laugh without feeling guilty.

Ultimately, “Jojo Rabbit” succeeds not only in telling a compelling story of a confused little boy but also having some good laughs along the way.