Journalism is under attack 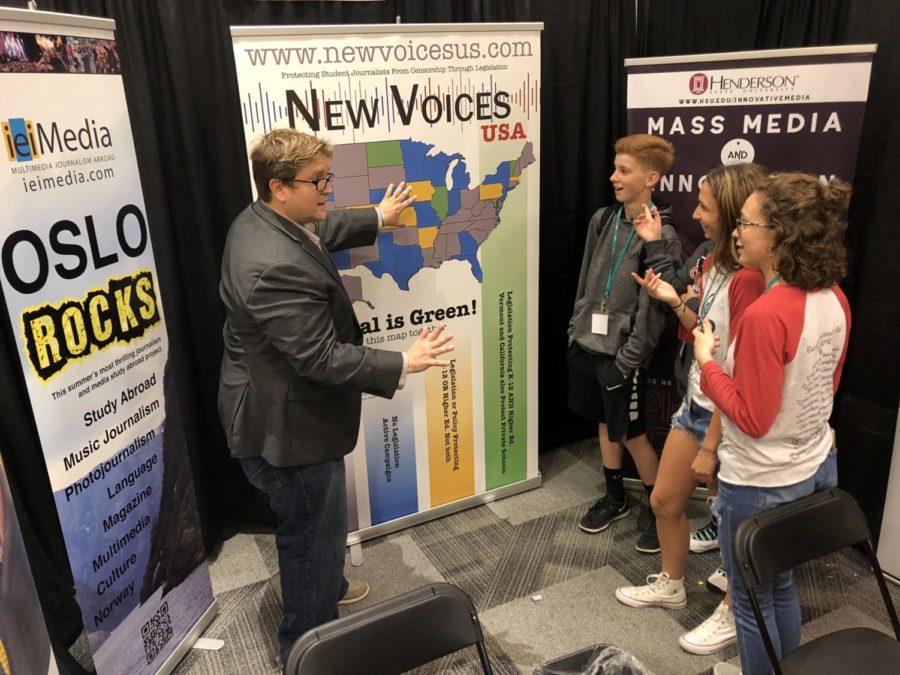 Journalism is under attack as student journalists are being censored by their teachers, administrations and school boards. It happens in Washington, Texas, Louisiana, Montana, Arizona. It does not happen in California, thanks to the New Voices campaign.

The New Voices student-powered campaign is active around the country as young people are still fighting and writing for legal protections to gather information and share ideas of public concern freely.

The movement began as a class project for a group of students at the University of Jamestown North in 2013 who wrote a bill to protect the rights of all student journalists.

“In 2015 it was passed unanimously as the first law that was comprehensively passed for colleges and high schools together,” said Steven Listopad, a previous journalism and mass communications professor at the University of Jamestown North and current professor at Henderson State University.

When Listopad called up a high school journalism program to ask if they wanted to testify or report on the bill his students were trying to rally support for, the teacher turned him down because the students at their school were not allowed to report on any political issues.

“If the most controversial thing you can report on is your cafeteria food then we’re not really teaching you anything,” said Listopad.

Now, all 50 states have a New Voices status in terms of how far along they are in their student journalistic protections campaigns.

Rights of expression and freedom of the press are already guaranteed by the First Amendment, and those allowances are not checked at the Carlmont sign or the door to C-hall; they are meant to follow any and every citizen in America in expression, speech, religion, writing, petition, and more.

However, considering the New Voices campaign started about five years ago, those rights still need to be fought for in order to protect student journalists.

The 2017 JEA/NSPA Fall Journalism Convention is occurring in Dallas, Texas, a state whose guaranteed rights to press freedom campaign is currently pending and remains unofficial.

Still, their campaign remains strong and student journalists are fighting for their rights.

“It’s important for students growing up and learning about journalism to understand that a free a free and independent media has never been more important,” said Dale.

The state of California, along with the University of Jackson North’s home state of North Dakota and a few other states, has the highest level of protection against administrative censorship with the guaranteed protection of both high school and college students.

However, in 2008, the Carlmont newspaper at the time The Scots Express was mysteriously shut down after a “racy first-person narrative” was featured in the November edition and administrators deemed it “inappropriate.”

The school’s publications have since reopened, but the instance highlights how even nestled between San Francisco and Silicon Valley, Carlmont is still susceptible to censorship.

Scot Scoop online, the Highlander newspaper and Scotlight magazine have taken on some intense topics such as suicide, marijuana, gun rights, immigration fears, and racial discrimination.

The Student Press Law Center (SPLC) protects students in schools all around the nation who embark on journeys to express topics they are interested in or that they feel their communities need to know about, even when it can make people uncomfortable.

“There are some folks who would prefer that student media shy away from topics that may be sensitive or controversial,” said Diana Mitsu Klos, director of engagement at the SPLC. “I think the whole point is school and education is to learn to be a critical thinker and to think for yourself and to ask questions and to explore things that you may not be familiar with and journalism is a highly responsible and informative way.”

The SPLC has a network of thousands of volunteer lawyers across the country that help to enact laws that protect student journalists, their advisers, and their programs from retaliation and censorship.

“Discussing these issues and giving of form to your entire community means that your school can be a place where rumors are more likely to be seen as fact, voices aren’t heard people don’t feel included.”

The SPLC is based in Washington, D.C., as is the First Amendment Center at the Newseum Institute.

“I think even in the public we all recognize that journalism is under attack and that applies at all levels and I think that trickled on down even to the high school level. I just hope it doesn’t discourage high school students from going on to journalistic aims because now there’s a need more than ever for people who are going to hold higher officials, school officials accountable,” said Lata Nott, executive director for the Newseum Institute and First Amendment Center.

Still, while the United States might be struggling to secure extended First Amendment rights, other places are even further behind.

“When I look at young journalists in Canada there are a lot of controversial topics that they may not be willing to lean into because they are afraid of the blowback,” said Gavin Adamson, associate professor at the Ryerson School of Journalism in Toronto, Canada. “I also find generally students in Canada aren’t pushing back against corporations who may try to control the message; they won’t let them take photos in certain places, they won’t let them record conversations in public places that may have their corporate logos on the background.”

Having the journalism convention in Texas, a state without further First Amendment protections at the moment, shows that the United States is already a step in the right direction in terms of discussion and action.

“I live in Ontario and our high school teachers don’t tend to support extra-curricular activities like newspaper clubs or journalism clubs. I wish there would be more institutionalized journalism like there is down in the states,” said Adamson.

Although, many still consider journalism to be under attack in the United States, a phenomenon that many schools and journalism programs have actually experienced.

“I have been censored. My students have been censored before and it’s not a fun thing to go through and it’s awkward as an advisor because you have a job and then you’re trying to teach students what they’re rights are so they know and they can be empowered to do the right thing, so it’s like this weird line,” I feel like if the laws were there that would help not just the adviser but the students as well,” said Rachel Dearing, a journalism advisor from Legacy High School in Mansfield, Texas.

This not only an issue of student journalism but the upholding of basic constitutional rights that should not need additional protections based on age, and that starts with having the freedom to talk about those issues.

“If we were restricted, we’d always be in fear of writing what we truly want to write,” said Amy Fullerton, a junior at Carlmont.

“Having somebody else tell you no and then you just take it,  I don’t think that that is the culture of a journalist. We’re supposed to cultivate people who want to ask questions, want to know why, and it’s ok to do that. I feel like the legislation would be putting you on an even playing field and maybe take that permission away and you’ll know what your rights are anyway,” said Dearinger.

The attack on journalism has only strengthened the resolve of students who want to be included in the discussion of important issues that affect them and the society they live in.

“Students need to learn that no matter how sensitive, some topics need to be reported on in order to educate others, so it is important for students to continue to fight for their rights,” said Fullerton.

With mass communication, the internet, social media and more, censorship is a reality of the past. The United States has moved beyond Hazelwood v. Kuhlmier, a Supreme Court case in 1988 in which student journalists were not allowed to publish articles on divorce and teenage pregnancy when the subjects were deemed inappropriate by their principal. The Supreme Court legally upheld the principal’s actions as not unconstitutional against the First Amendment, and yet the Highlander’s first issue of the year featured a story about suicide and social media and one about drugs. The next edition of Scotlight magazine will feature personal stories from students who have felt the pressure of racism in their lives. Student journalism has evolved.

Journalism may be under attack, but as long as new legislature is passing in the United States to protect student journalists, free speech can and will be upheld.

“The truth is your best defense,” said Klos.