Juice Wrld lights up the stage in San Francisco 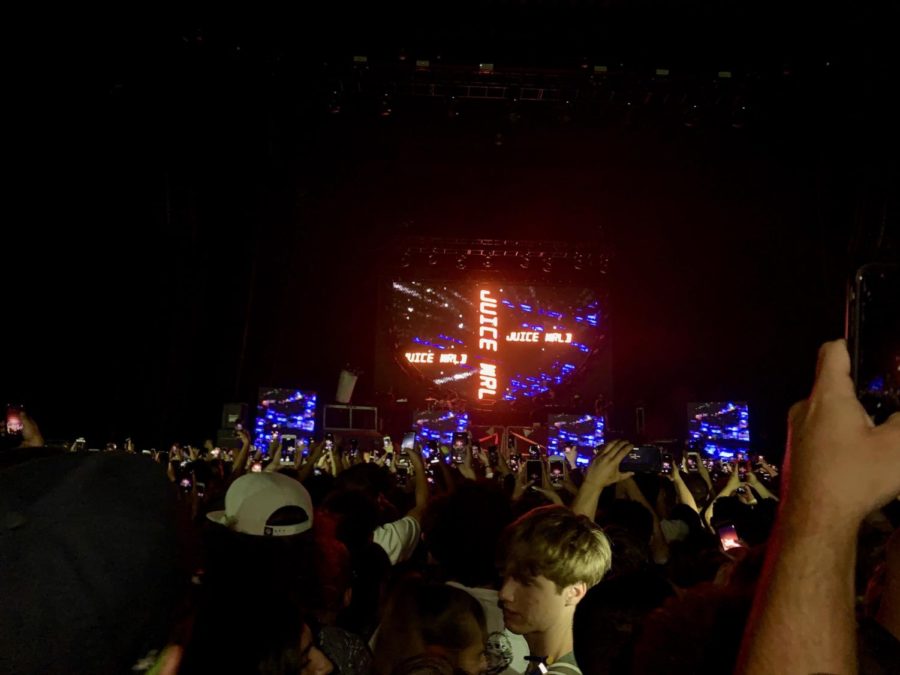 A crowd of 8,500 people gather to see their favorite artists perform in person.

While San Francisco residents went about their typical Monday routines, 8,500 people danced the night away inside the Civic Auditorium at a Juice Wrld concert.

Out of the 18 shows on the tour, American rapper Juice Wrld made a stop in San Francisco, Calif. on Monday, May 1. His name, Juice Wrld, intends to represent “taking over the world.”

The concert began at 8 p.m., when Juice and guests Lil Mosey and Ski Mask the Slump God hit the stage.

The concert was inspired by his most recent 21-track album, “Death Race for Love.” The songs discuss the internal guilt faced when one does something wrong. Juice plays a “druggie” on the edge of downfall, wandering through a wasteland on substances while searching for a person who will end his pain before it ends him.

The night started with Lil Mosey, one of the youngest in the rap industry, who performed his number one hit “Burberry Headbands.”

“Despite how young Lil Mosey is, his music is so good,” said Alexa Jay, a senior in high school who attended the concert. “I always want to sing along.”

As the show continued, Juice Wrld performed one of his faster-paced hits from 2018,  “Armed and Dangerous.” The uplifting beat and smoke effects brought the crowd on their feet.

“I have been listening to Juice for years. People can actually connect to his lyrics unlike most other rappers,” said Elias Johansson, a freshman in college. “Most of his songs are sad but he has some feel-good songs too which puts everyone in a good mood.”

The colorful atmosphere and creative screen displays made the concert unique and exciting. The blinking lights turned on and off throughout the night, creating a 3D illusion for fans.

As the night progressed, Ski Mask performed a few songs from his new album. He is best known for his beats, which are easy to dance to.

“When Ski Mask was about to come out you could feel the crowd’s mood switch. Everyone was so excited,” said Kosta Sweezy, a junior at Menlo Atherton High School.

In his performance, Ski Mask included a tribute to XXXTentation, a rapper who was murdered in the summer of 2018. The emotional lyrics in XXXTentation’s music directly correlate to that of Juice Wrld’s in a way that many other rappers lack.

As the night ended, Juice Wrld made his final appearance on stage to perform the last songs from his album. Every year, his albums exceed his fans’ expectations and his popularity continues to skyrocket.

“I like Juice because his music is sad and emotional. I have gone through so much and listening to his music has helped me through it,” Sweezy said.

The concert’s set up and delivery of music made the night truly special for his fans.

“Going to this concert made me fall even more with Juice Wrld as a person and his music,” Sweezy said. “His voice and words of wisdom are what highlighted the night and made it so memorable.”