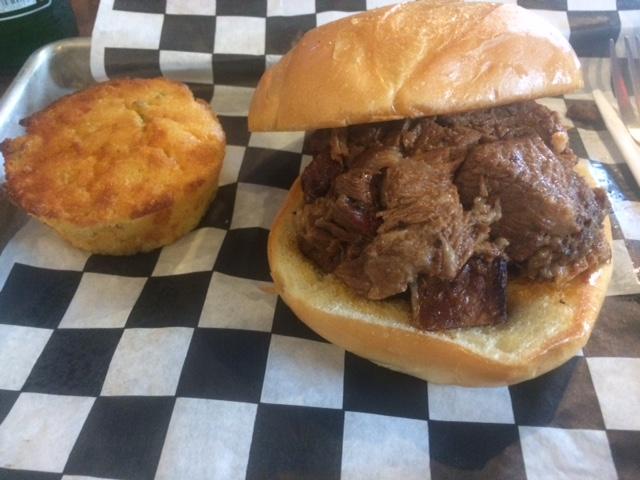 The juicy and flavorful pork is extremely tender, and goes great with a side of cornbread to sop up the juices.

America has quite the fascination with barbecue. It is probably one of the most recognizable cuisines of America. The sad part, however, is that Belmont and San Carlos has an absence of barbecue — very few restaurants serve it, and even fewer are wholly barbecue places.

Thankfully 3 Pigs BBQ exists; it is one of the few barbecue restaurants in the Belmont-San Carlos area. It emulates the rugged and traditional “wet” barbecue of the Midwest, which is essentially meat that oozes out juices and sauces.

3 Pigs BBQ serves up a variety of meats from tri-tip to pulled pork, chicken, fried chicken, ribs, and hot links. These meats are available in the forms of a taco, sandwich, or even just plain.

It was a tender slew of sliced chunks of hot protein wallowing in all of its own juices. The juices leaked into the bread, which makes it become something more than just an add-on. I normally am opposed to eating pork; I just think pork chops and bacon are overrated. Sorry, someone has to say it.

Though barbecue is different, it is a modern version of an ancient form of cooking. The meat becomes tender and bursting with flavor, and changes into something one cannot resist.

The Louisiana hot link was very nostalgic for me. It has that crunchy-soft texture of a hot dog from a baseball stadium. Its power to evoke that memory is so forceful it’s like being hit by a car. Its flavor is similar to that of a more tame chorizo; the spiciness is toned down, but still there. I quite liked it but pulled pork, tri-tip, and brisket are more of the types of barbecue I prefer.

3 Pigs BBQ offers several barbecue sauces to go with your meats. I hate sweet sauces, so spicy was the logical choice for me. You may need to squirt a decent amount of it to really get your meal spicy. Other sauces include a mustard sauce, their “house” sauce, and a few others totaling five or six sauces.

It’s nice to have a good barbecue place close to home. I can enjoy good meals for fair prices without having to trudge all the way to Southern California, the Midwest, or the Deep South. 3 Pigs BBQ is a nice place with a cool atmosphere reminiscent of the faraway barbecue joints and smokers uncommon in the Bay Area. This is a place I would definitely recommend if you are craving a piping hot plate of almost anything barbecued.