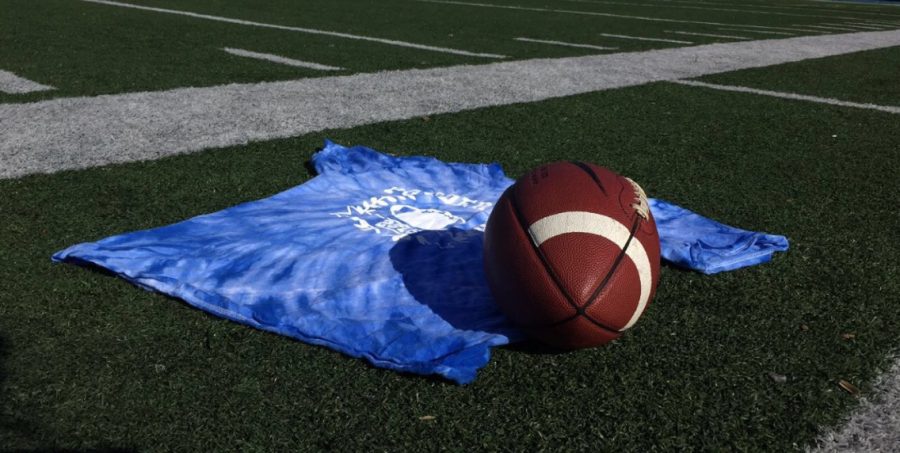 The junior team designed jerseys for the Powderpuff tournament.

Students reversed traditional roles in the annual Powder Puff tournament that was held at lunch during homecoming week.

Instead of the usual roles at football games, girls played football on the field while boys cheered on the sidelines.

Each of the four grade levels had their own teams and designed their own jerseys, wearing them proudly on the days of their games.

Following their victory against the sophomores, the juniors went head-to-head with the seniors in the championship game.

The juniors won 21-14, taking the title as Powder Puff champions.

“Powder Puff was really fun this year,” said junior co-captain Isabel Mayoss. “There was some miscommunication with the referees at times, but overall, the games were competitive and spirits were high.”

Although it rained over the field during the championship game, the teams did not let it dampen their spirits.

“Playing against the seniors was the most exciting Powder Puff game I’ve participated in so far, and the rain made it even more fun,” said Mayoss. “People were slipping and falling, but luckily no one got hurt.”

The game was close, and many players and coaches were proud of what their peers accomplished.

“The game was wild this year,” said junior coach and cheerleader Will Klieves. “The juniors were amazing.”

For the seniors, this Powder Puff season was one of the last chances to get involved at school and many found themselves heartbroken due to the loss.

“It was fun playing this year. Losing the championship game made the whole team feel defeated because we all worked really hard,” said senior Maya Paulo. “This was my last time playing Powder Puff at Carlmont, and I’ve played since freshman year. Even though the loss made me sad, I had a lot of fun.”

Despite the defeat of the seniors, when the bell rang and the players shook hands, it all came down to good spirits and fun.

“This was a great way to end homecoming week,” said Mayoss.