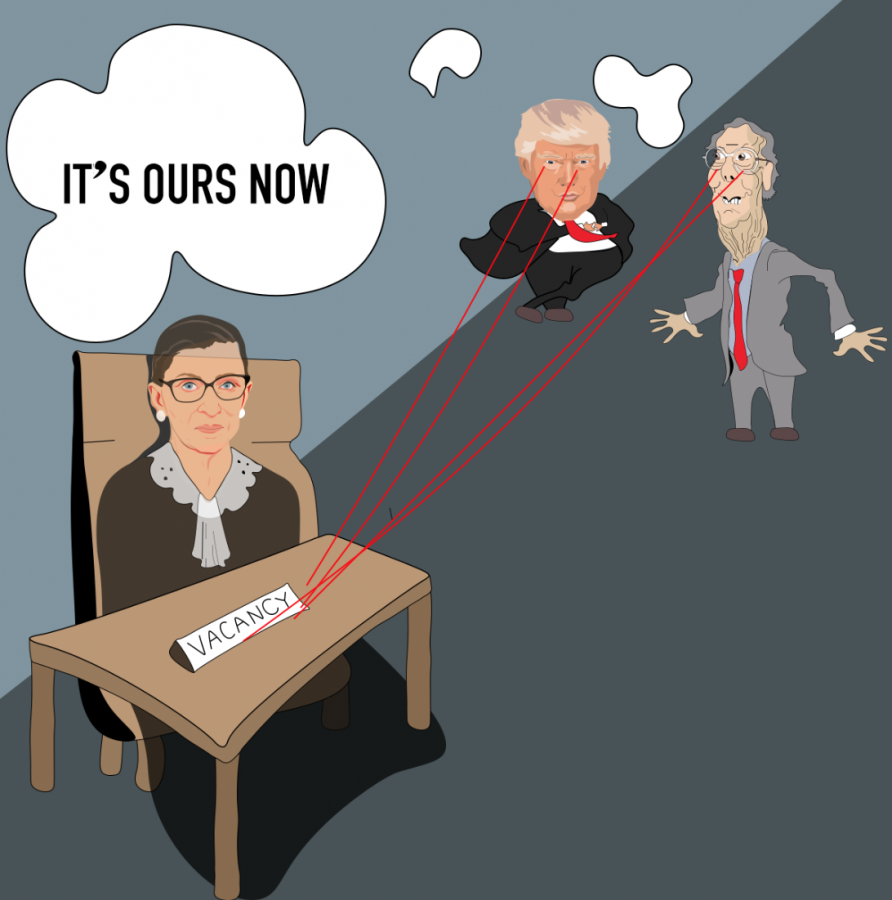 “My most fervent wish is that I will not be replaced until a new president is installed.”

In her final days, these were some of the last words Supreme Court Justice Ruth Bader Ginsburg wanted the public to know.

Now, only a few days later, her legacy and our rights are all at risk.

Senate Majority Leader Mitch McConnell has announced that Justice Ginsberg’s wish will not be taken into consideration and that President Donald Trump will be selecting a Supreme Court Justice nominee. This decision is a direct contradiction to the precedent that Republicans put in place four years ago.

Former Democratic President Barrack Obama’s nominee Merrick Garland was denied admission into the Supreme Court, nine months before the 2016 election, because Republicans claimed Obama’s time was almost up, so the nomination would not represent the people.

In 2016, Chuck Grassley, Republican Senator of Iowa, said, “The people deserve to be heard. And they should be allowed to decide through their vote, for the next president, the type of person that should be on the Supreme Court.”

Yet Senator Grassley has pledged to vote for the nominee with less than 45 days until the 2020 election. Denying a Democratic president the ability to nominate a Supreme Court Justice in his last year, while fast-tracking the nomination of a Republican president is blatantly hypocritical.

Even Chairman of the Senate Committee Lindsey Graham had previously said in 2016, “This is the last year laying duck president. If Ted Cruz or Trump gets to be president, they’ve all asked us not to confirm a selection by President Obama. If there is a Republican president in 2016 and a vacancy occurs in the last year of the first term, you can say ‘Lindsey Graham said let’s let the next president, whoever it may be, decide.’ You can use my words against me, and you’d be absolutely right.”

With Senate majority set 53-47, Republicans need 50 votes to confirm the nomination. While some Republicans, like Susan Collins, have abstained from voting for a new justice so close to the election, it has been reported that the nomination may go through with Mitt Romney in agreement.

This hypocrisy of altering precedents depending on the president’s party affiliation is a breach in our democracy. If there is a rule for one president, that rule must stay consistent. Without consistency in upholding such precedents, inequality in the treatment of political parties will become exacerbated. Acting in the best interest of the Republican party is not necessarily acting in the people’s best interest. The replacement of Justice Ginsberg is monumental, and Republicans know that. She was a fierce advocate for equality throughout her 30-year career on the Supreme Court, and with a conservative justice in her place, Republicans will be able to roll back the progressive impacts she had, like upholding Roe v. Wade, Deferred Action for Childhood Arrivals, and LGBTQ rights.

It is not only cruel that the protection of marginalized groups depended so heavily on an 87 years old battling cancer, but disheartening that at the end of her life, she was not able to be at peace, but instead had to carry that burden. Now, in the aftermath of her passing we see how the Republican party is giving their agenda priority at the expense of the people, which is a dangerous attack on our democracy.