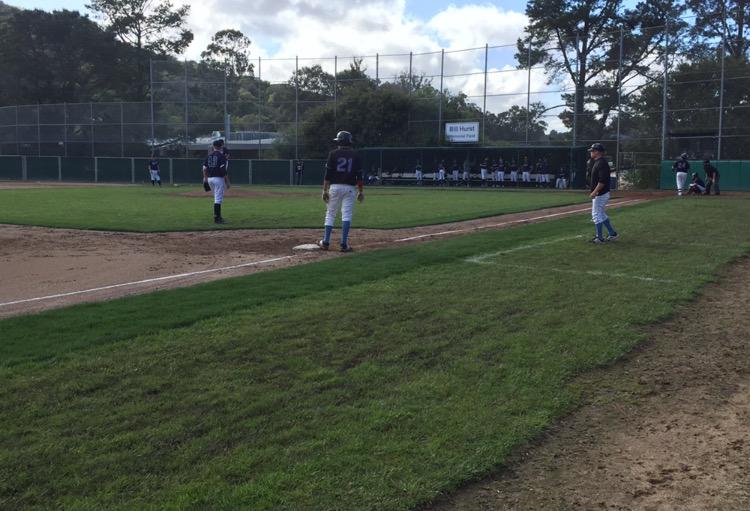 Carlmont JV Baseball plays defense during the top of the third inning against the Hillsdale Knights.

Carlmont JV baseball is headed towards a victorious season once again. This season thus far, they have yet to lose a game, going 7-0. Over this span of games, they have been winning by a margin of over 7 runs a game.

Ben Fong, a sophomore, said, “We’ve been doing so well this year, due to the depth of our team, which is leaving no weaknesses in our lineup.”

That said, so far this season, all of the Scots’ games have been either out of conference or part of tournaments. These games do not count towards the in conference record, which determines their standings.

Following the cancellation of the JV Baseball game at Mission San Jose on March 20, due to the rain, the Scots had to prepare themselves for their first in-conference game.

Ryan Busser, a sophomore, said, “A conference game determines the outcome of next year’s leagues, if you don’t win in your league you get moved down and you don’t want that to happen. Also since you play the same team twice per season, it gets more competitive because you learn about the other team in the first game and use that to plan for the next game.”

Starting off in the first inning neither team was able to score, despite Carlmont player Sammy Bean advancing to third base following a sac fly by Adam Cross and a steal on a wild pitch.

During the bottom of the second inning the Scots were able to develop the first lead of the game; with runners Jason Korjeff and Ryan Husky on the base there was a wild pitch to Daniel Friis allowing the runners to advance. With a RBI from Gabriel Ramirez, Korjeff was able to score a run, putting the Scots up 1-0.

This momentum continued into the third inning as Carlmont extended their lead over the Knights to 2-0, following a deep double from David Bedrosian and a RBI from Busser to send the runner home.

Although the Knights began to fight back in the top of the 4th inning through a wild pitch from the Carlmont pitcher and a sac fly, they were only able to bring the score to 2-1.

However, from this point on the Scots began to dominate, through scoring five more runs in the next three consecutive innings to extend their lead. This stretch was highlighted by several offensive plays, including a stolen base by Husky and a double by Tyler DeSmidt.

Overall, it was a successful game for the Scots as they now extend their winning streak to 8 straight games. Their next home game will be on Friday, March 31, against Sacred Heart.