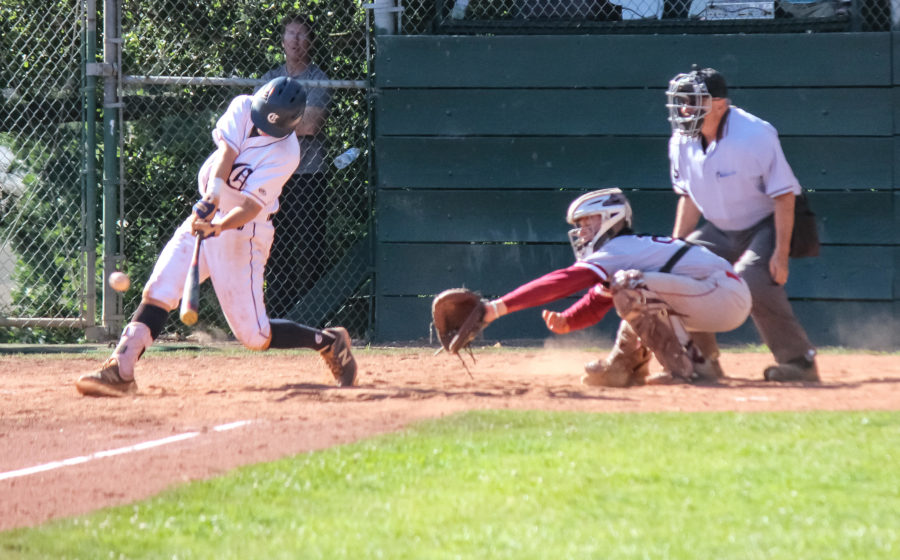 Bradley Croshal, a sophomore, hits a ball to left field during Carlmont's blowout win on Wednesday.

The Scots took care of business on a sunny afternoon at Carlmont, maintaining their status at the top of the league. The Scots entered the game tied for first place with Burlingame and Cappuccino and got the job done against a weaker opponent in Sacred Heart.

“We want to keep our roll going and stay in first place ’cause we’re fighting for that first place right now,” said manager Willie Baroncini.

The Scots, who had won their previous five conference games, kept their roll going right off the bat.

With freshman pitcher Tripp Garrish starting on the mound for Carlmont, clutch defensive plays in the top of the first were vital. A double play followed by an easy catch for freshman Aidan Kurt helped the Scots to escape into the bottom of the inning only allowing one run.

It was now the Gators’ turn to pitch, and the first six pitches were all balls, forcing their manager to come to the mound and talks things over.

It did not get much better for Sacred Heart from there. The Carlmont dugout began to get involved, cheering on the poor pitches and taking advantage of the situation.

“We were kind of going crazy with it due to the bench hype-ness,” said freshman Brady Greene.

Pitching errors loaded the bases, and a base hit from Nikita Yentus, a freshman, was good enough to score Bradley Croshal, a sophomore.

On the next at-bat, with the bases loaded once again, sophomore Camden Scholl was able to hit a bomb to left field.

Scholl’s double was good enough to score all three runners, and after Scholl stole third and then home, the Scots offense seemed to be in full swing with the score 5-1.

“It was just all energy, just working as a team,” Scholl said. “We just strung together a bunch of hits, and it just kept working.”

The Scots got two more runs in the first inning and seemed to be taking a commanding control of the game, which now had a score of 7-1.

The success of Carlmont’s offense allowed Garrish to pitch more calmly, only giving up two more runs in the next two innings.

“It makes it easier for me to pitch and I have more of a cushion when we go up by a lot,” Garrish said. “I can throw strikes and not have to worry about the other team getting hits as much.”

The Scots continued to help Garrish out as their lead was extended to seven by the end of the third inning. The score was at a relaxed 10-3, giving the Scots complete control of the game from what ended up being that point on.

“We have a winner’s mentality so we go out on the field and we give a 100% heart, baby,” said catcher Joey Dubois, a sophomore.

The only real scare for Carlmont came in the fourth inning, where Sacred Heart was able to string some hits and walks together. Despite the Gators scoring four runs, Carlmont was able to rally back and score seven runs in the fourth, fully deflating the Gators and putting the score at 17-7.

“We knew we were gonna win, and we wanted to tell them there was no chance of coming back, so we needed to step on their throats,” Croshal said.

A pitching change in the fifth worked well for the Scots. The closer, freshman Tanner Van Why, was able to quickly get his three outs and end the game two innings early on a mercy rule.

“This was just a continuation of that energy and that fire, and it really helped us to make sure we still had it in us to keep working,” Scholl said.

The Scots will face Sacred Heart again on Friday, May 3, where the team will look to get one step closer to the first place trophy.

Lucky for Carlmont, Cappucino and Burlingame are playing each other in their own series, and it is likely at least one will drop out of contention by Friday.

However, the Scots have their eyes set only on themselves, choosing to focus on their remaining games instead of other teams. The mood around the dugout is one of excitement; everyone is ready and hungry to win the league.

“We need to win our last three games. We got Sacred Heart, again. We’ve got Terranova. I think we can take those guys,” Scholl said.