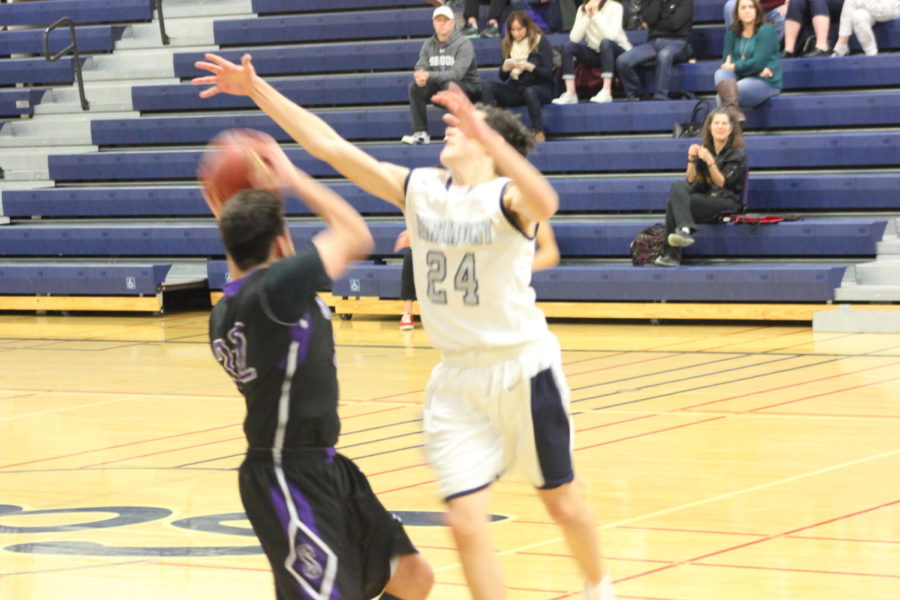 Sophmore Miles Ozorio blocks a shot from a Sequia player.

Boys JV basketball beat their rival Sequoia on Friday night, bringing their in league record to 3-3, with a score of 47-38.

The game was a defensive battle, with both sides trading missed shots to missed shots. The two teams seemed to easily cripple the opposing side’s offense with an aggressive man-to-man defense.

“This was not an average matchup, so physicality is expected,” said sophomore shooting guard Jonathon Su.

The second quarter played to the same tune, as both teams never could quite get a good rhythm on the offensive. Sequoia showed promise late into the first half, scoring five unanswered points to put them in the lead 23-20, forcing Carlmont Head Coach James Jewett to take a timeout with two minutes and 20 seconds left in the first half.

“Sequoia came back because we lost our composure and started to lose focus. This was the point of the game where it could have gone either way,” said Tej Tummala, a sophomore and power forward for the team.

Sequoia’s lead was short-lived, however, as the Scots answered right back with sophomores Daniel Awad and Alex Wong scoring a combined six unanswered points in the last two minutes. The second half ended with a 26-23 score in favor of the newly reenergized Scots.

During halftime, Jewett went back to the basics and preached to his team the importance of boxing out and hustling. His team seemed to take his advice to heart as they rallied around the ball and outhustled Sequoia on 50-50 opportunities.

“We boxed out and rebounded a lot better after halftime, and we started to play a complete game of basketball as time went on,” Su said.

The Scots dictated the rest of the game and had Sequoia on their last legs well before the buzzer sounded with a score of 47-38.

There was more to be happy about than just another win for the Scots. The game was a test to see whether they have adapted well from the recent injury of starting small forward Donnie Livingston, and soundly passed with their success.

“Losing Donnie hurt us because he is an outstanding player. We have taken some new players in to help fill the minutes that he would typically play, and they have been doing a great job as of late,” Jewett said.

Resilience seems to be the common theme for this young basketball team. Power forward Wong had some insight on the challenges this team has faced and overcome.

“We’ve had a bunch of injuries and trouble with ineligibility. Incorporating young freshmen onto the team was also a bit of a challenge. However, we’re competitors and I certainly think that the future looks promising,” Wong said.