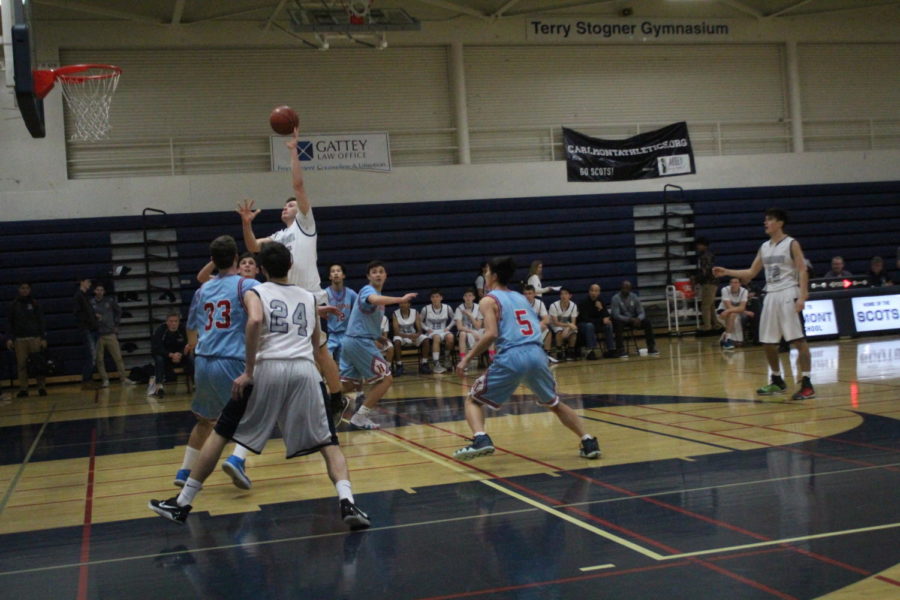 Will Hesselgren, a sophomore, attempts to score more points for Carlmont.

The Scots fell short on Wednesday night after they were unable to close the gap, losing to Hillsdale’s JV boys’ basketball team with an ending score of 45-39.

Hillsdale started the game off strong by winning the tip-off and taking the ball to their side, but both teams failed to score right away. The first quarter ended quickly with both teams neck and neck, the score was 9-8 after Miles Ozorio, a sophomore was able to rack up six of those eight points and stop Hillsdale’s growing lead.

“I think we’ve been playing well, but we’ve been shooting ourselves in the foot with untimely fouls and missed free throws,” said Head Coach James Jewett.

Things began to look up for the Scots after Jonathan Su, a sophomore, was able to shoot the first three-pointer of the night and give Carlmont a closer score. But the Scots were unable to get ahead in the second quarter, and the quarter ended with a score of 20-13.

“I think we let Hillsdale get ahead by so much because we didn’t play hard defense and we just didn’t communicate well during the game,” said Andrew Eliopoulos, a sophomore.

A couple minutes into the third quarter, the Scots found themselves in a drought, unable to score points against Hillsdale.

The defense for Carlmont was unable to stop the Knights from scoring more points and giving Hillsdale a bigger lead. However, the team’s growing chemistry and teamwork on and off the court allowed more people to score for Carlmont. Daniel Awad, a sophomore, was able to score some points, then Carlmont called a timeout with the score at 29-18.

“We’ve tried to listen to each other more and although it was a bit rough in the beginning, as the season is coming to a close, we feel it is important to act as a family and not just a basketball team,” Su said.

Carlmont racked up the majority of their fouls during the last quarter of the game, which helped Hillsdale take a bigger lead as they made multiple free throws.

But despite the missed free throws and multiple fouls by Carlmont, the Scots were able to reduce the gap and make the game closer after Tripp Garrish, a freshman, made a couple of free throws and a three-pointer with just 20 seconds to go.

Despite their strong effort, Carlmont was unable to pull through with a win and ended the game with a score of 45-39, adding to their record of three wins and five losses.

Although the loss they suffered was tough, winning is not all the team cares about. The head coach wants all players to improve and learn from their mistakes in order to move up to the next level.

“I really don’t look at the record, what I really focus on is how well are we playing, especially our sophomores, because they will be competing for varsity next year. I mainly just look at how we’re doing and if we’re consistent,” Jewett said.