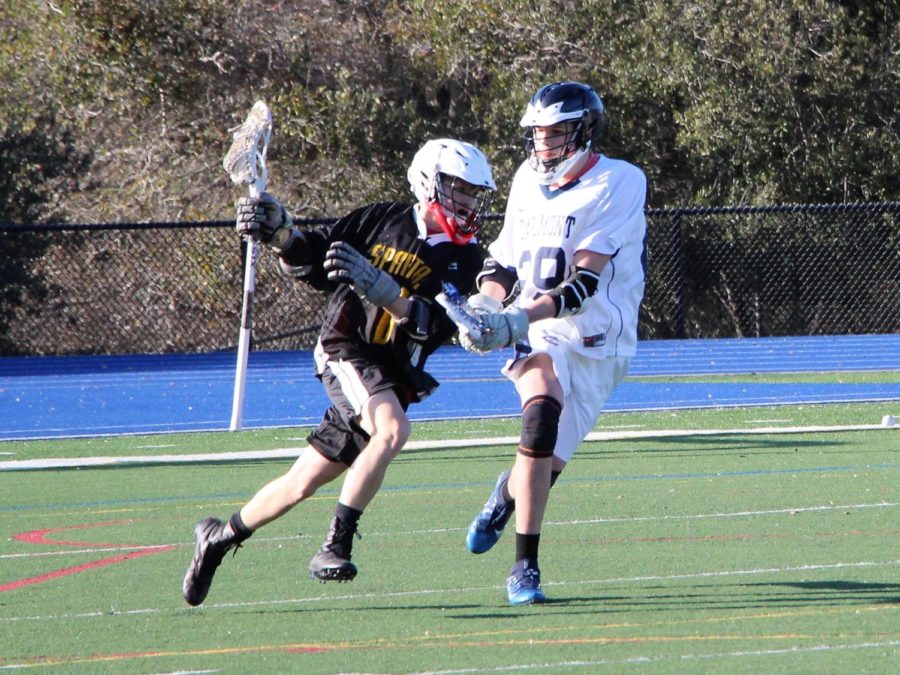 Head Coach Chris Agbanusi doesn’t ask much from his JV lacrosse players other than to put their hearts into the game. While not pretty, his boys did just that, pulling off a 10-9 win at home against Mountain View.

“We did a lot of silly mistakes, and our defense was having a little trouble. Honestly, the game could have gone either way. It was a matter of who wanted it more, and we just wanted it more,” said Spencer Kelley, a sophomore who plays the position of attack.

The Scots offense got hot early, winning the faceoff to start the game and proceeding to score off a pass from freshmen Matthew Schnapp to sophomore Riley Schultz. Mountain View answered quickly, however, and the Scots soon found themselves down 2-1 in the waning moments of the first quarter.

“It was a little hard to adjust to Mountain View’s offensive style. They played more of an iso-attack to get their shots off, and they capitalized on our confusion early,” said defenseman Andrew Shao, a sophomore.

The Scots’ offense, led by Kelly, roared back late in the first quarter when he scored two goals in the last two minutes of the quarter. This evened it up at 3-3.

The second quarter saw more of the same tight-knit action, and the scoreboard read 5-5 at the start of halftime.

“We expected this game to be a close one. Mountain View is a team that will turn your mistakes into points, so we had to be careful with the ball going forward. We expected a dog fight, and we got one,” Schultz said.

The third quarter was more favorable to the Scots. Another two goals from Kelley helped jump-start a Scots lead to 7-5. The Scots re-energized and upbeat proceeded to score in waves to end the third quarter at 10-6.

“We started rolling after the third. Our bench just started to get more into it, and it just fueled us to keep going harder,” said Kelley.

Mountain View wasn’t done just yet, however. The Spartans scored three unanswered goals and were seeking another to tie the game with only 1 minute and 10 seconds left in the game. Scots’ sophomore goalie Josh Baxter made sure Mountain View would not walk away with the win, earning a clutch save as regulation ended.

“It was not a perfectly played game by any means. There’s always going to be something that pops up that we have to adapt to. Our offense showed massive improvement as soon as we started to pass the ball around goals started pouring in,” said Agbanusi.

With the win, the Scots improve their record to 2-1 and solidify their high ranking in the standings. The season is looking promising.

“We are improving rapidly as a team. Every practice we see more, and it’s just a matter of time before we become a force to be reckoned with,” said Agbanusi.