JV boys lacrosse settles the score with their rivals 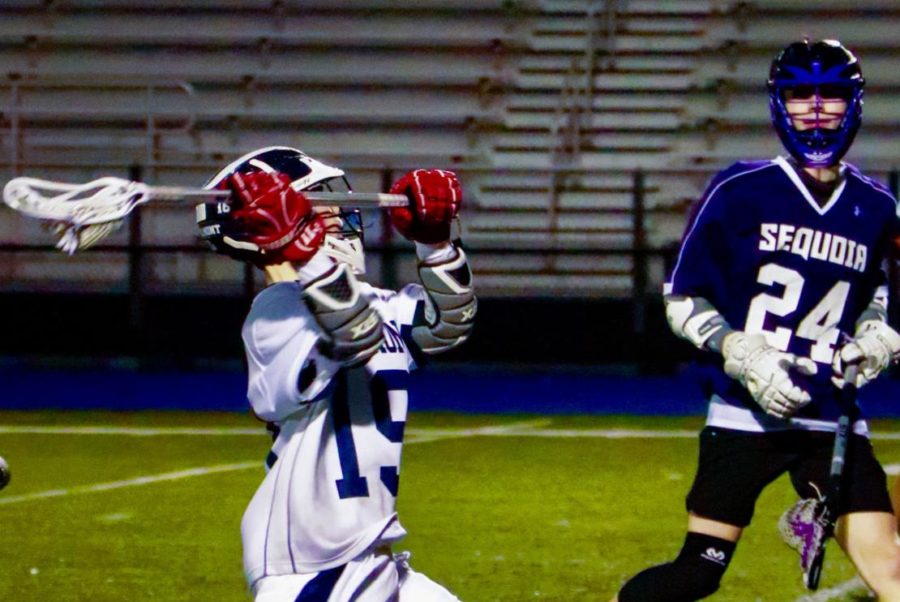 The Carlmont Scots could not have crafted a more dramatic game for themselves in their JV boys lacrosse battle with Sequoia on a rainy Tuesday night. They had every element of the perfect story-line: a deficit, a struggle, heavy rain, and a hero.

Last season, the boys had raced out to an early lead against Sequoia but could not maintain it. The host Ravens gradually chipped away at the deficit and ultimately pulled out a thrilling victory. This year, the Scots turned the tables.

Attackers Matt Gattey and Spencer Kelly joined forces with midfielders Justin Luke and Mathew Shnap to lead a spirited comeback that lifted Carlmont to a thrilling 10-9 upset of rival Sequoia. These four players scored eight goals in total to close the contest as the Scots overcame a five-goal deficit midway through the second half.

The game began with large pillows of clouds forming in the sky and a splatter of rain here and there. By the time the first timeout was called two minutes later, the rainfall was much more intense. So much rain was falling that the sound blurred into one long, whirring noise, like the rotor blades on a helicopter.

The storming skies were not a problem for the Ravens early on as Eli Goulden, a sophomore, capitalized following an array of strong ball movement and keen passes, putting Sequoia up 1-0.

Carlmont’s traditional man-to-man defense was further broken down as Will Meak ran right past his long pole to feed Hudson Ackerman for an easy shot from a close mid-field position, extending Sequoia’s lead to 2-0.

The Scots defenders then dropped into a zone with no man behind the net, pressuring Sequoias attackers to make tricky quick passes. This resulted in back to back steals from Carlmont’s Emerson Monge and Devon Partner.

“By having our mids fall farther back and having an extra defender up top, we were able to force poor passes, which worked pretty well considering they are a new team with inexperienced players,” said Monge, a sophomore.

The stronger defense allowed for more shot opportunities and eventually Carlmont’s first goal by Spencer Kelly who picked up a loose ball and whipped it home, catching the defense off guard.

“The goalie wasn’t expecting me to shot, and normally it’s not a shot I would take but he didn’t even have his stick up and I saw that as an opportunity,” Kelly said.

The Scots’ quick rush of success was promptly crushed when Sequoia scored two goals in the span of 45 seconds, and a third one minute later, tearing apart the supposedly strong zone defense. The Scots were only able to answer with one more goal late in the second quarter, ending the half down, 5-2.

As the game intensified, so did the rain, now falling so hard it became difficult to see from one goal to the other. The defense sank while the offense thrived. The teams traded goals back and forth with Sequoia going up one and Carlmont tying up the game, 3-3, 5-5, 7-7. The scored jumped up as the clock ticked down.

As the score evened again at 8-8 with one minute and ten seconds left, it seemed like the two teams would be heading to overtime. At the minute mark with the score still 8-8, Gatty dodged his defender and drove in going airborne and extending his stick to the far side of the net.
The score paused at 9-8, with Carlmont in the lead.

Reid Rodriguez, a sophomore, then lost a hard-fought tip-off that led to an astounding block by the goalie, Joshua Baxter.

“It’s basically like picking your poison. Play us one way, we’re going to get you. Play us another way and we’ll get you, too,” said Gatty

The hero was Spencer Kelly. With 37 seconds remaining, he dove for a loose ball, out-boxing the entirety of Sequoias attack squad. He got up and was off to the races; he split the double mid-fielders at center field and clambered over another a second later. Popping in and out of the crease, Kelly step-faked and rolled aggressively dropping the next defender who dared to step in his way. At just a few yards away, Kelly dodged the final man, who struck just as Kelly unleashed a right-handed strike over the left shoulder of the Ravens’ goalie.

“It was pretty clear we had no answer for their offense,” said Meak.

With Kelly netting a hat trick with only 30 seconds remaining, Sequoia’s Coach, Mark Ditargiani, drew up a play that relied on decisive actions and perfect execution.

But to no avail.

With ten seconds left, Emerson Monge, sprinted up the field behind two Raven players, and forcefully stripped the ball away to clutch the game and close it out 10-9.

It was an invigorating win for the Scots.