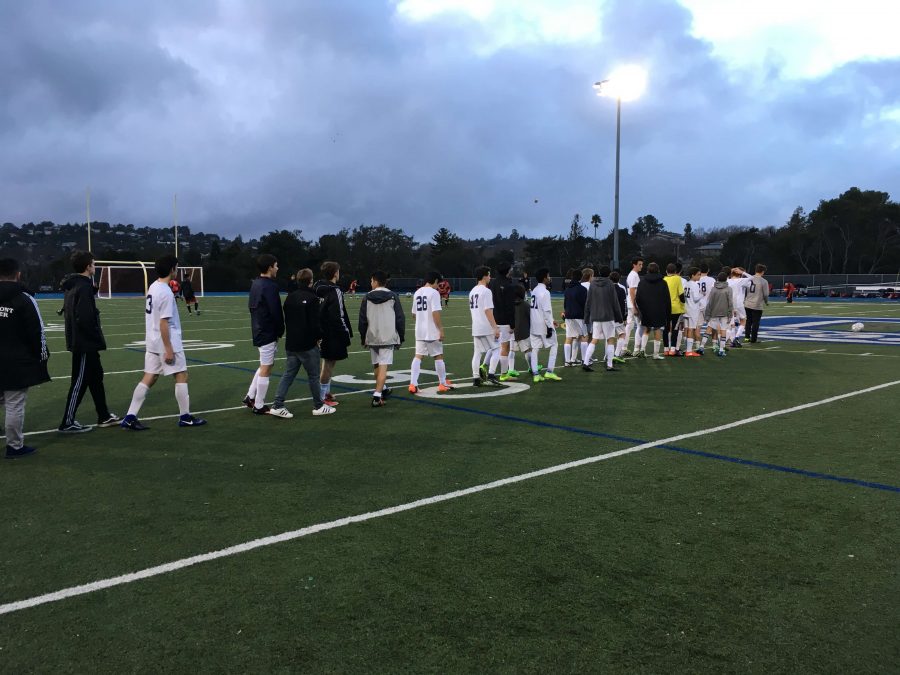 JV Boys Soccer lines up to shake hands with Aragon after a 5-1 defeat.

Apparently, the third time is not the charm.

The JV boys soccer team learned this lesson the hard way after a disappointing 5-1 loss to the Aragon Dons.

The loss on Feb. 3 was hardly the way to finish off the week, after losing their previous two games: Monday against Sequoia, and Wednesday against South San Francisco.

“These games are defined by small moments, and when we have mental lapses or lose our composure, we don’t get a good result,” said head coach Sebi Morales.

The team’s season has been one marked with defeat, with a 2-4-2 record. However, Morales likes to stay optimistic and believes his team improves every practice.

The last time the JV faced the Dons they tied them 1-1. Unfortunately, Friday’s game did not yield the same outcome.

The game opened with a quick goal from Aragon in the sixth minute, but the Scots quickly retaliated when Morgan Schmidt, junior, scored off of a rebounding shot from under the Aragon goalie.

Unfortunately, that would be all the points for Carlmont as Aragon scored another off of a diving header to bring the score to 2-1 into halftime.

After the half, Aragon came out strong, and after a cross over the middle, they scored from the left side. Carlmont came close to closing the deficit in the forty-third minute but fell short when the shot went wide by a foot to the right. Aragon proceeded to score two more goals to cap the game off at 5-1.

“Our defense really broke down. We couldn’t coordinate and move as one unit around the field,” said sophomore captain Jason Korjeff. “We need to stay focused 100 percent of the time, and not screw around on the bench. That’ll definitely help us.”

The air was chilly, with a cold wind blowing onto the field. The rain was a problem early on, but for the most part stayed away during the game. Disappointment, however, arrived and stayed for every goal scored by the Dons.

Coming into this game, the Scots had only two wins: against Woodside and Westmoor. They had two ties and four losses.

Next week’s game will be on Feb. 8 against Menlo-Atherton, giving the Carlmont JV time to improve their game.

Although it was a disappointing week, Morales stays positive that his team will overcome the hardship.

“We just need to make some adjustments. After a loss like this, players’ characters are really tested, but I’m sure we’ll come out of this week stronger than before,” said Morales. 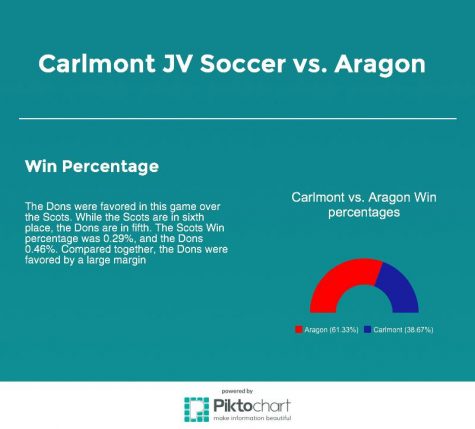