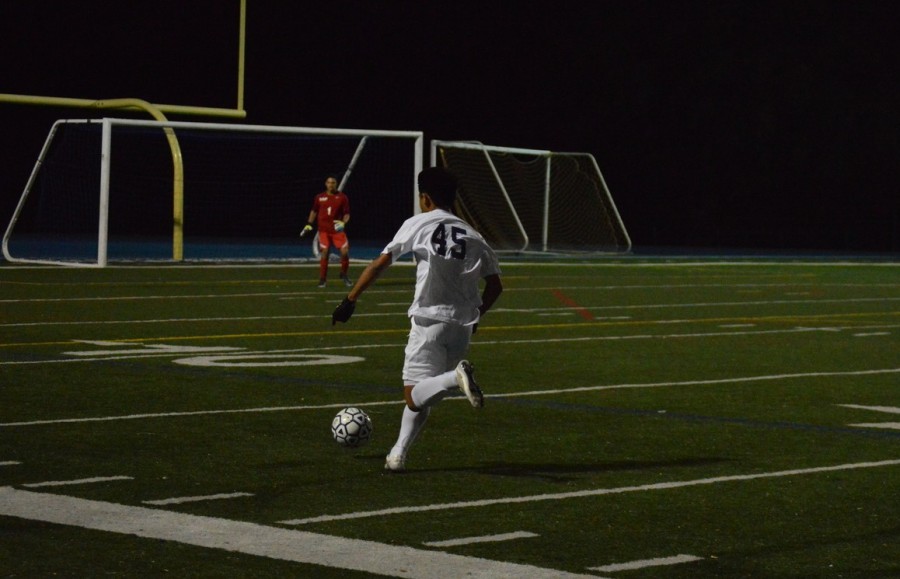 Sophomore Matthew Mathias (45) races down the field in effort to score a goal.

Their continuously dedicated work ethic and aggressive offensive attitude led them to a 3-0 win.

At the start of the game, both teams held equal amounts of possession. However, as the game progressed, the majority of play slowly shifted into South City’s half of the field.

After 22 minutes, sophomore Noah Sanchez scored the first goal when South City’s goalie came out of his box.

The Scots continued to dominate the match with strong passing and effective communication. Six minutes after the first goal, sophomore Matthew Mathias scored the second. South City’s goalie had come out of his box again, and Mathias shot around him.

“As a team, we’re getting better each game. We’re having better combinations and really starting to play through,” said Mathias.

The Scots worked hard to keep their victory right from the beginning of the second half.

The game stopped after about ten minutes. Sophomore Ethan Hoskins had suffered a hit to the head.

“I went in for a header and collided heads with my opponent,” said Hoskins, “I didn’t get to go back in, so I sat out and iced my face.”

The Scots continued playing, racing for the ball and applying pressure to their opponents. Although they played more offensively, they also maintained an unstoppable defense, shutting down almost all of South City’s opportunities for a goal.

Eighteen minutes into the second half, sophomore Zane VanArsdel dribbled the ball past South City’s keeper into the goal, making the score 3-0.

“I think we did great. We dominated play and took care of business,” said VanArsdel.

Although more scoring opportunities were created and more shots were taken, the game ended at 3-0. The Scots had shut out the South City Warriors for the entire match.

All in all, JV boys soccer did a great job of controlling what happened on the field. Their defense was solid and their offense was determined.

JV coach Sebi Rosalez was very pleased with the victory.

“The game went very well. The boys stuck to the plan, and we’re continuing to get better every time we play,” said Rosalez.