JV boys volleyball serves up another win for Carlmont 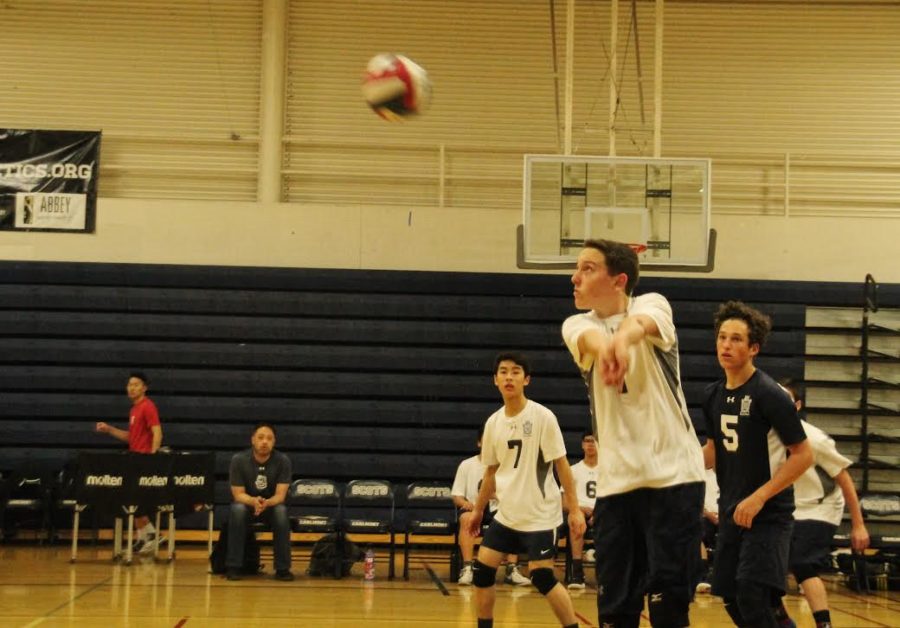 The Scots were able to pull out a strong win in a close game against the Aragon Dons on Thursday night.

The first set started out with both teams holding up long rallies to keep the score close, until Aaron Ma, a sophomore, was able to get a kill on the outside to allow Carlmont to gain a small lead.

Shortly after the kill from Ma, the Dons called a timeout at 6-2. The timeout allowed the Dons to stop Carlmont’s run and get a point back. However, several missed hits from Aragon enabled Carlmont to widen the gap and begin another run, with Patrick Zhang, a sophomore, tipping right over the block into the 10-foot line to throw the Dons off.

“They’re a young group, so there’s a lot of energy, there’s a lot of willing to do better and play hard. Their teamwork got better as the season progressed and as we started playing more games and understanding how the game is,” said assistant coach Michael Lapuz.

Aaron Trierweiler, a junior, then served multiple aces to give Carlmont a strong lead of 12-5 over Aragon. The Dons were still able to come back and gain a few points after a net was called against Carlmont, with Aragon’s defense keeping the ball alive with multiple dives and saves.

Carlmont’s well-built team chemistry showed on the court, the team easily working together to come out strong in the first set.

“I think the team has improved a lot since the beginning of the season, we know generally where to be and what to do, but sometimes there are miscommunications. I think the whole team has a strong motivation to play the game and that’s why we improved a lot faster in less time,” said Patrick Zhang, a sophomore.

The Scots were able to keep the Dons on their feet, increasing their lead after Mihai Tudor, a sophomore, served a couple of aces in a row to keep Aragon 10 points behind at 20-10.

Despite their stronghold over Aragon, Carlmont began to miss several serves, allowing Aragon to get the point back and gain an advantage.

At game point, the score 24-14, a player from Aragon attempted to make a kick-save to keep the ball up, but Aragon was unable to finish the point and ended the set at 25-14, the Scots taking the first set.

“Most of us haven’t played volleyball at all before the season started, but as it went on and we picked up basics, we began to get better and we had a better understanding of what we were doing,” Ma said.

The Dons started the second set off strong, getting a lead of 3-0 right away. Aragon was able to maintain their increasing score, as Carlmont gave up a few points through multiple missed hits and off passes due to miscommunication. This allowed Aragon to keep the Scots behind, the score now 10-2.

However, the Scots were still able to stay in the game after Trierweiler got a tool off of Aragon’s block, getting the ball back and allowing Carlmont to stop Aragon’s run. Miscommunication on Aragon’s side enabled the Scots to catch up, the score now 12-8, the Dons still up.

Carlmont was able to tie the score back up at 13-13, keeping the Dons behind after Jackson Gibbs, a freshman, served several aces in a row, giving the Scots five points.

However, Carlmont could not keep up this run, enabling Aragon to get up 21-20, making the Scots scramble to get the last point. Aragon eventually ended the second set after Carlmont had a miscommunication error, ending the second set at 25-22. The Dons tying up the set score at 1-1, forcing a third set.

“During the second set we didn’t really play very well in the beginning. We messed up a lot of passes and couldn’t return the ball. We did start to get back into it soon after though,” Ma said.

The third set began like the first, both teams rallying back and forth, players scrambling to get the ball over the net. The Scots racked up a lead of 6-3 after Aragon could not keep the ball up, leading the Dons to begin to trail behind.

Carlmont quickly gained more points, the Dons falling behind with the score at 8-5. To widen the gap further, Ma hit a set off of Tudor, getting a kill and point for Carlmont.

Despite their growing lead, the Scots allowed the Dons to get up and tie the score at 10-10, unable to end the long rallies. The last few points of the third set kept everyone on the edge of their seats, the score going back and forth, both teams close to getting the win.

The Scots eventually got up to the game point, holding the Dons just one point behind at 14-13. After a serve from Tudor, the Dons passed the ball back over to Carlmont, allowing Ma to end the game with a tip into the 10-foot line.

“The team dynamic is good, we are all each other’s competition in a friendly kind of way. One person does something cool that inspires others to also step out of their comfort zone. In the beginning of the season most of us thought we knew what we wanted to play, but it changed for a lot of us,” Zhang said.