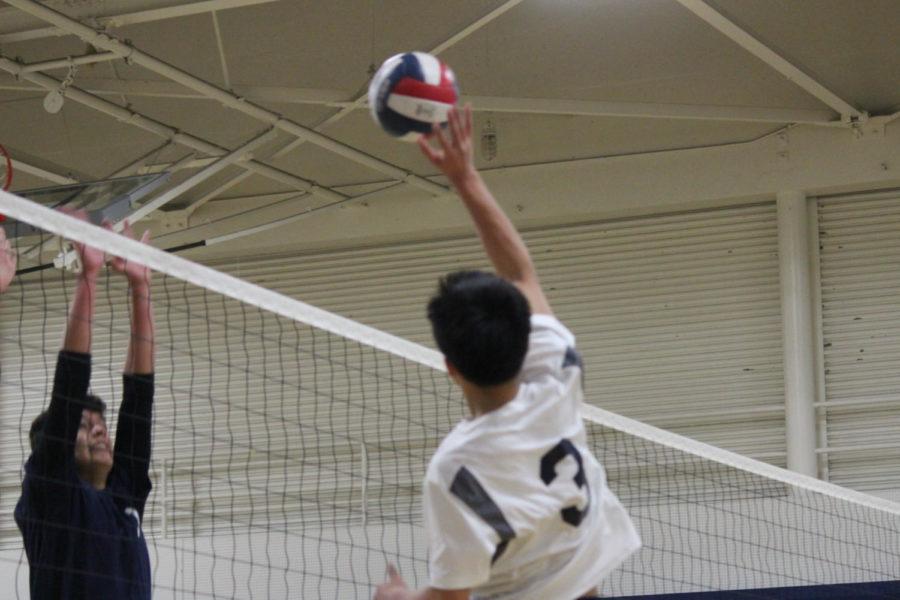 Freshman Justin Wong hits the ball over the net, getting past the Eagles blocker.

Some returning players, but mostly new ones.

Sophomore Stelios Kyriacou said, “My goal for today’s game is to not miss my serves and to get at least three kills.”

The game’s original start time of 5 p.m. got moved back because the referees were behind schedule. But after 15 minutes of waiting, the referees arrived and started the game.

Both teams were scoring back and forth, with only a few minor hitting errors on both sides.

In an attempt to widen the gap, Justin Wong, a freshman, got his third kill of the game, making the score 11-6.

As the first set progressed, it became apparent that the Scots needed to work on their serves, as no one could successfully make more than three serves in a row.

“We need to get our serves in; we had seven missed serves in the first set,” said Coach Mike Lapuz, the head coach for both JV and varsity.

Near the end of the first set, Carlmont’s back row players dug a spike from the Eagles, but the pass was too close to the net for the setter to get, so freshman Dominique Veinstein tipped the ball, being careful not to touch the net. At this point, the score was 18-12.

“I don’t play middle at all, but I feel like I did okay,” said Veinstein.

The set ended at 25-17, with both teams having something they needed to work on.

The beginning half started with more technical errors, with players from both teams overlapping each other and doubling. This made Everett Alvarez tied with the Scots at 9-9.

Wong tried to make up for it by getting a kill, but he ended up also getting called for a double.

Nick Mattas, a junior, said, “The second set was sloppy. We have to play better and make fewer mistakes.”

Carlmont’s energy was depleted. They weren’t communicating anymore, which caused the Eagles to gain a four-point lead. But with the encouragement and applause from the crowd, the Scots got back in the game, scoring seven points in a row.

The game ended at 25-17, the same as the first set, but was filled with many more errors for both teams.

“In this game, they needed to be more talkative, the court was surprisingly quiet. The team also needs to be more aggressive,” Lapuz said.

Their next game is a home game against Menlo-Atherton High School (MA) on March 9.

Mattas said, “Our next game is against MA tomorrow and we need to be a lot better if we want to be able to contend against them this year. MA will definitely be our hardest opponent.”