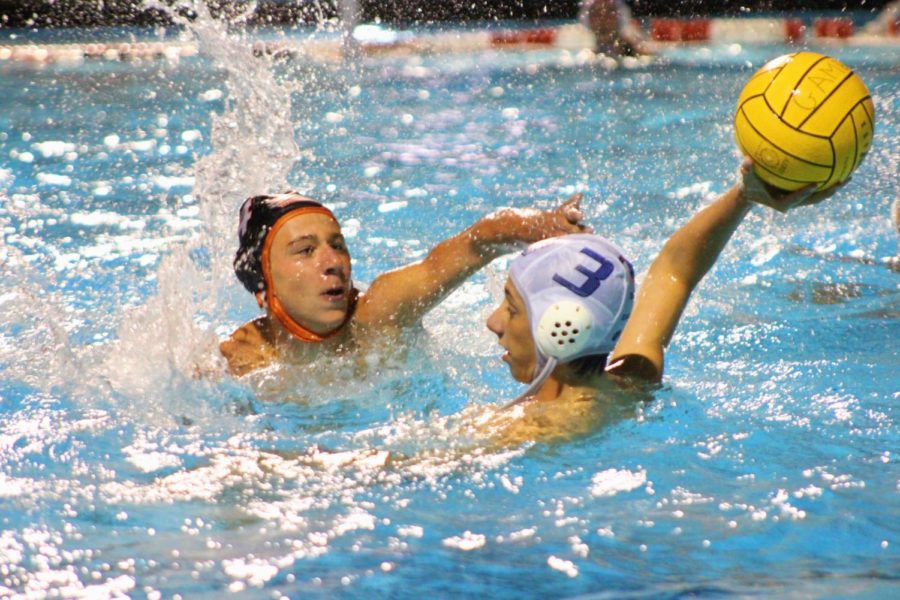 Lucas Calenda, a sophomore, looks for an open teammate while an opposing player puts up a block.

The JV boys water polo team suffered a defeat against the Woodside Wildcats in an intense game that resulted in a score of 10-3.

The team’s loss may have been partially due to two of their starters being unable to play. One of the starters, Alexey Krystyn, a sophomore, was unable to play due to sickness while Dylan Lobo, a freshman, suffered from a concussion. However, the team’s loss against the Wildcats only brought the Scot’s record to 3-2.

When asked about his thoughts going into the game, sophomore Lucas Calenda said, “When we played them in a tournament, we beat them by two points and we didn’t have a lot of our starters in. So I think it will be a close game.”

Carlmont played Woodside in a tournament previous to their match on Oct. 1, and beat them. The previous victory led the Scot’s to enter Tuesday’s game with high hopes.

Owen Bertine, a Woodside team captain, saw the previous match differently and claimed that Woodside didn’t give Carlmont their all when they faced off the last time.

“We already lost one game, so we didn’t have the drive to play well since we weren’t gonna win the tournament anyway,” Bertine said.

The first quarter began with a swim off, and the ball went to one of the Woodside captains, Joey Batista, who then threw it to Bertine who swam the ball to the goal. Bertine took the shot within the first minute of the first quarter and made it, scoring his team a point. As the ball now went to Carlmont, sophomore Ethan Torban threw the ball over to Calenda who shot and scored the first point of the game for his team. By the end of the first quarter, the score totaled up to 2-1, with Woodside in the lead.

Going into the second quarter, Woodside’s intensity and aggression increased, allowing them to shoot and make two more goals on Honukai KnappAu, the Carlmont goalie.

Lobo said that one thing he would’ve changed in the game if he was not sick was the aggressiveness. and he.

“I want to try and influence the team to be more aggressive,” Lobo said.

As the second quarter came to an end, Owen Finigan, a sophomore, got the ball and passed it to Konstantin Pejakovic, a freshman, who scored the Scots a point in the last minute of the quarter. By the end of half time, the score was 4-2 with Woodside still in the lead.

According to Batista, Woodside’s passing hasn’t been great the past few games. However, that did not stop the Wildcats from scoring four more goals on Carlmont, leaving the score of the third quarter at 8-2.

As the final quarter came, Woodside was able to score two more goals on Carlmont leaving the score at 10-2 with only two minutes left. With only a minute on the shot clock, freshman Jack Beasley threw the ball to Calenda, who was able to shoot and score his second point of the game, ending the quarter at 10-3.

Despite the loss, Carlmont’s coach, Alexander Moore, believed the team performed well in multiple aspects of the game.

“They did really good on their endurance for having a small bench and the goalie did a really good job trying to lead offense and defense from where he was,” Moore said.

The Scots will have their chance for redemption when the two sides play each other again on Oct. 23.