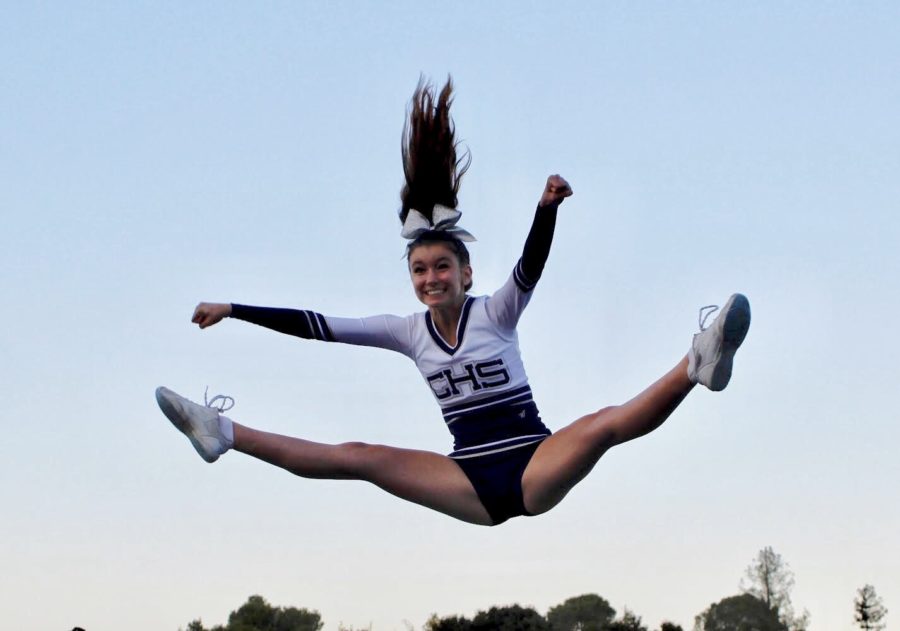 Captain Sophia Morgan, a sophomore, does a toe-touch after being thrown into the air by her teammates.

For many years, Carlmont had just one cheer squad. However, starting in 2019, the JV cheer team made its debut, and so far, they’re off to a great start.

JV cheer was specifically created to be more inclusive for underclassmen. It also creates an environment where people with less experience can get used to how high school cheer works. This year, the team consists of 11 freshmen and five sophomores.

Sophomore co-captains Sophia Morgan and Katelyn Nightengale are the fierce leaders of the team. Both have dance experience and are excited to help their teammates improve.

“My goal for the team is to create a strong bond so that no one feels left out,” Nightengale said. “When the whole team is together on the field, that’s when we can advance our skills even more.”

The team supports other JV sports by hyping up the crowd through cheers and stunts on the sidelines. At halftime, they perform a choreographed routine to showcase their skills. They also participate in school assemblies and pep rallies.

“We’ve been showing up at all the games, home and away, to support the football team. We also do our best at assemblies,” said head coach Keira Lyman.

JV cheer has been working hard to improve, not only in preparation for this season but also eventually for varsity. Lyman’s main goal is to teach the basics to members of JV cheer.

“A lot of the girls haven’t cheered before, so it’s really important for us to work on building a strong foundation,” Lyman said.

At the start of the school year, JV and varsity came together to perform at freshman orientation, welcoming new students.

“It helps that we’re able to work with varsity,” Lyman said. “We did a routine with them earlier this year, which was a really good experience for us.”

As the first performance of the year in front of the school, freshman orientation helped to promote the cheer program. It also challenged the members of JV cheer to perform alongside more experienced cheerleaders.

On top of physical skills, JV cheerleaders are learning skills that can be applied outside of cheer. Nightengale and other members of the team have emphasized how much they value the friendships and bonds that they’ve been able to form through cheer.

“JV cheer has allowed me to meet a lot of new girls in my grade that I might not have known otherwise. It’s been so nice getting to spend time together and see each other grow,” said Elena Eng, a freshman.