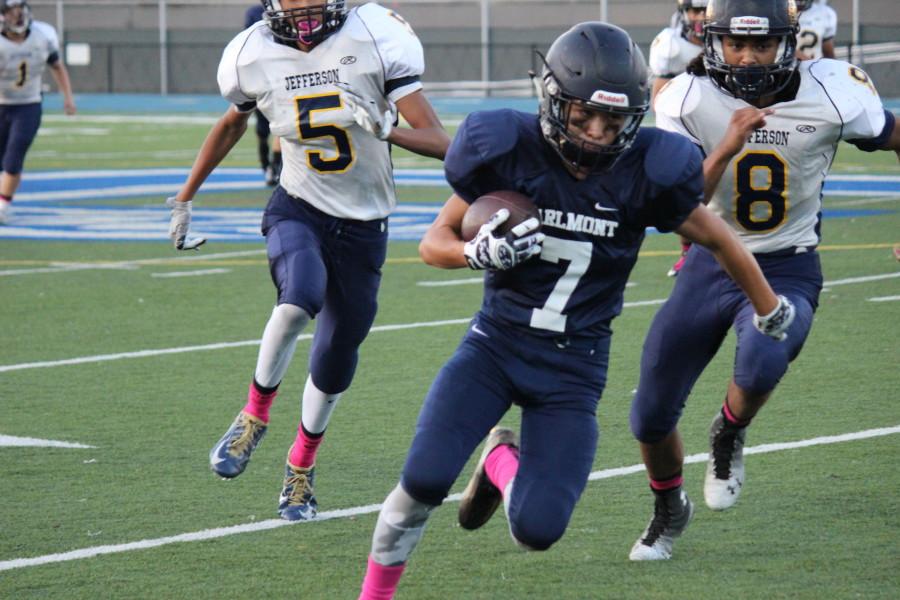 Sophomore Anthony Arteaga (7) runs down the side line at Carlmont in the fourth quarter.

The Scots fell short against the Jefferson Grizzlies this past Friday with a 26-19 loss.

The JV football team played an excellent game against Jefferson High on Oct. 16, despite the final score.

The game started off with Jefferson kicking off, and Carlmont getting the ball at the 20-yard line. After losing possession of the ball, the Grizzlies scored a touchdown, and missed the extra point. Immediately after the touchdown, sophomore Josef Gonzalez received a punt, knocked over one of the Grizzlies’ gunners and ran up half of the field to put the Carlmont offense in a good position.

Using Gonzalez’s play as an advantage, Carlmont handed the ball off to running back Devon Sagon who ran it all the way for a 46-yard touchdown. With the success of the extra point afterwards, the Scots led 7-6.

In the second quarter, Gonzalez caught a 28-yard touchdown to widen the gap between the scores. Gonzalez caused a 10-yard penalty for excessive celebration, which led to a missed extra point for a score 13-6.

The Grizzlies scored a touchdown at the end of the first half, making the score 13-12 with Carlmont in the lead.

“The first half started off slow, but the second half is where it really began to pick up,” said wide receiver sophomore Anthony Arteaga.

The second half started off with a touchdown for the Grizzlies and a two-point conversion making the score 20-13.

Immediately following this play, Carlmont worked their way up the field with a catch in the red zone by Arteaga. This led to Sagon running the ball in for his second touchdown. With the missed extra point following the touchdown, the score showed 20-19 in the favor of the Grizzlies.

“Our team had a hard fight and didn’t give up. Without the work of the team as a whole, I wouldn’t be as successful,” said Sagon.

The Scots’ defense worked hard, but came up short as the Grizzlies scored again to make it 26-19.

The fourth quarter was where the Scots began to gain momentum when Carlmont was fourth and 11, and Arteaga made a 35-yard catch. Next, Sagon received a ball and ran out of bounds to get another first and 10 with 44 seconds on the clock. At fourth and three with 14 seconds on the clock, tight end Shawn Azzopardi caught the ball to get yet another first and 10.

With too little time and no timeouts left for Carlmont, the Scots lost the game in the red zone with the final score of 26-19.

JV football head coach Bruce Douglas said, “The team showed outstanding effort, and gave it all from start to finish. The boys put in everything they had.”

Although Carlmont did not come out with the win, they played a successful game in terms of making good plays. The team looks to change their 2-4 record for the better at Millbrae High School on Oct. 23, next Friday.