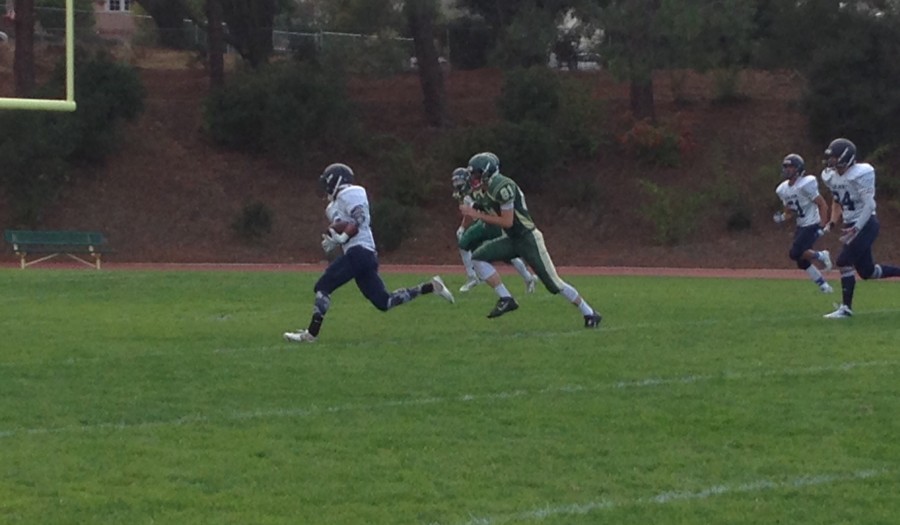 The Scots took home a win on Thursday, Nov. 5, against Cappuccino High. With a score of 23-0, running back sophomore Devon Sagon made the first touchdown that afternoon during the second quarter for Carlmont.

“It felt good and made me more pumped up for the next play,” said Sagon.

During the second half of the game, quarterback sophomore Henry Reich threw a pass to wide receiver freshman Jayden Kuhn, who completed the catch and ran 82 yards to lead the Scots to another touchdown.

“I thought of the play as I stood there on the line. I looked ahead to see the one person standing between me and the end zone. As I saw Henry hike the ball, I took off anticipating where the pass would be. The ball landed in my hands and I took off reaching the end zone. All I can say is the way I felt was exhilarating,” said Kuhn.

In the beginning of the fourth quarter, the Scots pushed back Cappuccino to their end zone and linebacker sophomore Demarii Blanks tackled the quarter back for another two points.

“Before the play started I already knew when he was going to run, so I telegraphed where I was going to hit him in the backfield. As the play went on and he came around my side, I grabbed him by his jersey and threw him down,” said Blanks.

The Scots celebrated their first shutout game win, and the team continues to work hard to achieve their next victory. The players look forward to their last game next Friday at Carlmont against their rival school Sequoia and hope for another shutout.

“The whole team is pumped up for this game, but it also marks the end of the season. We’ve come so far as a team and it’s sad to see the season come to a close. All we hope to do is end the season on a high note, and we’re working hard to make sure we can accomplish that goal,” said cornerback sophomore John Tan.