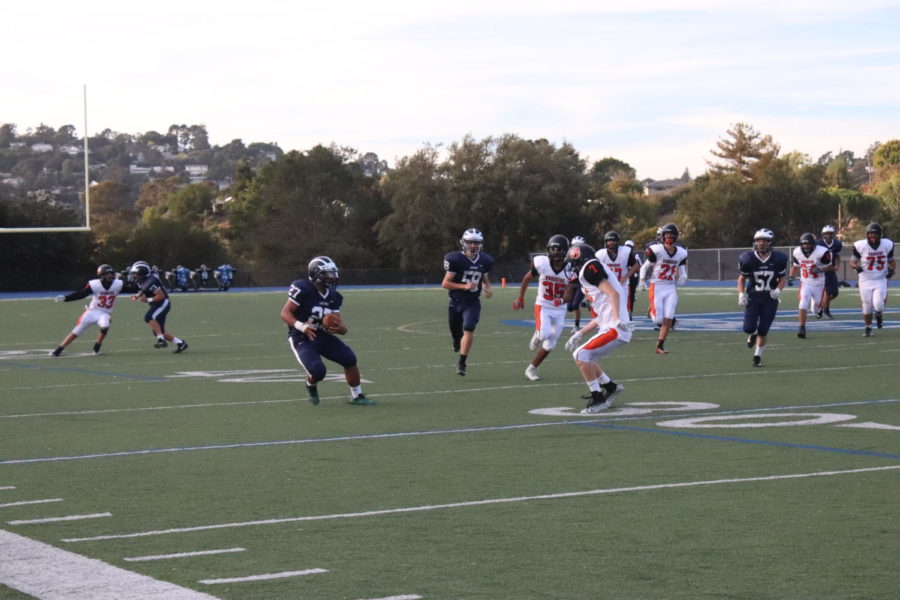 Running Back Dane Fifita, a freshman, puts a move on a Woodside defender, fighting for extra yards.

The Carlmont Scots JV Football team overcame a flurry of penalties to edge out the Woodside Wildcats 26-21, winning their respective league.

Winners of their last eight games, the Scots improve to 8-1 overall and 5-0 intraconference while Woodside drops to 6-2-1 and 4-1. The Scots will look to continue their success next week at Sequoia in what will be their final game of the year.

The Scots’ smashmouth (run heavy) offense proved to be enough as they needed just two pass attempts to get things done. Freshman Dane Fifita and sophomore Sean McKenna, who rushed for a combined four touchdowns, three of which belonged to the former, led this run attack.

The Scots got off to a bad start, with Zane Rodriguez, a sophomore, fumbling but recovering the opening kick-off. Later that drive, the Scots were forced to call a timeout with 7:51 remaining in the first quarter due to confusion on the offense. Fifita helped get the Scots into Wildcat territory but coughed up the football on the Wildcat ten yard line.

No damage was done, however, as the Wildcats’ quarterback was intercepted on the ensuing drive, resulting in a 10-yard rushing touchdown for Fifita, who later converted the 2-point conversion, putting the Scots up 8-0 with 5:47 remaining in the first.

“After the fumble, I knew to keep my head up, because if put my head down the whole team would’ve fallen,” said Fifita, the Scots lead half-back. “After that, I came back with a touchdown.”

The Wildcats responded fast after a Carlmont onside kick went out of bounds, drawing a flag. The Wildcats two minute 60-yard scoring drive was capped off with a 41-yard touchdown pass, and the 2-point conversion was successful, tying the game at eight apiece.

Carlmont wasn’t fazed and went right back to the ground game, feeding Fifita the ball. On the second play of the drive, Fifita broke off a 13-yard run that ended when he ran into a referee and two defenders. A few plays later, Fifita completed the 75-yard drive with a 47-yard touchdown, his second of the game. However, the Scots were unable to convert the 2-point conversion, putting the score at 14-8.

At the start of the 2nd quarter, Woodside was backed up with a 3rd and 26 after a tackle for loss (TFL) and a sack by Rodriguez. They converted with a 36-yard pass to freshman wide receiver Maceo Latimer who caught the touchdown earlier. Their drive stalled when the QB threw an incomplete pass on 4-9, turning the ball over to the Scots.

The Scots punted after going backward on offense due to penalties, giving the ball right back to the Wildcats.

Woodside punted on the next drive after getting flagged for unsportsmanlike conduct, complaining about a no-call on pass interference. This positive outcome didn’t stop the Scots from using their second timeout due to defensive miscues, however.

Once again, the Scots had to punt and gave great field position to the Wildcats, who called timeout with 1:33 remaining in the half. Woodside receiver Nicky Hart, a freshman, caught a 13-yard pass to tie the game and took the lead on the PAT.

The first half ended with the Wildcats leading 15-14.

“Going into halftime, the team was a little shaken, but once they calmed down they realized it was a one-point game and embraced the challenge entering the 2nd half,” said head coach Sanjevi Subbiah.

The Scots came out of the half strong forcing a Woodside punt on the opening drive after a near interception.

Fifita muffed the punt but was able to recover, as a Carlmont penalty pushed them back 10 yards. Two plays later, Fifita turned on the jets for a 78-yard touchdown run, his third of the day. Yet again, the Scots failed the 2-point conversion, making the score 20-15.

Woodside responded with a 50-yard pass to Latimer, who was tackled by sophomore defensive back Zain Patel on the 5-yard line, a touchdown-saving tackle. It proved to be so as McKenna (Free Safety) broke up a fourth down pass, giving the Scots the ball at their own 5-yard line.

Two plays and two penalties later, the Scots were backed up with third and 12 from their own 3-yard line. Looking to get out of safety territory, Scots quarterback Timothy Netane, a freshman, handed the ball to McKenna, who turned a corner and ran free into the secondary, scoring a 97-yard touchdown.

“We were backed up pretty far, and we just needed a big play to get started, and if I could just get the first down. I had the big play and just took it,” McKenna said.

The Scots failed to convert the 2-point conversion for the third time, making them 1-4 on the day and leading 26-15 with 3:20 left to go in the third quarter. The Wildcats’ drive was substantially supported by 5 Carlmont penalties, helping get them down inside the 10. The Scots defense held up, though, as they forced another turnover as the Wildcats failed to convert another 4th down.

The Scots went nowhere as the fourth quarter began, punting the ball out of bounds at their own 30, leaving the Wildcats with a short field to work.

The Scots defense came up big again, forcing another turnover on downs.

“The defense played amazing in the clutch,” McKenna said. “They fought so much, and I’m so proud of them.”

The Scots spent the next drive chewing the clock, bringing it down to just over 2 minutes before punting.

Woodside wasn’t finished yet and quickly scored on one play with a 62-yard Latimer catch and run touchdown, failing the 2-point conversion putting the score at 26-21.

Woodside attempted an onside kick, but Patel recovered it and wisely went to the ground afterward.

Woodside was forced to use their final timeout with 1:39 left in the game, but the Scots still ran out the clock, effectively ending the game.

Despite the win, the Scots were not without faults, committing a total of 19 penalties during the game, 14 of which came in the 2nd half.

When asked about how the team was able to overcome these penalties, coach Subbiah said, “Playing tough defense because we were put on the short end of the stick and backed up against our own goal line which we had to defend numerous times, but we shut them down. We played tough defense when we had to despite giving up some big plays.”