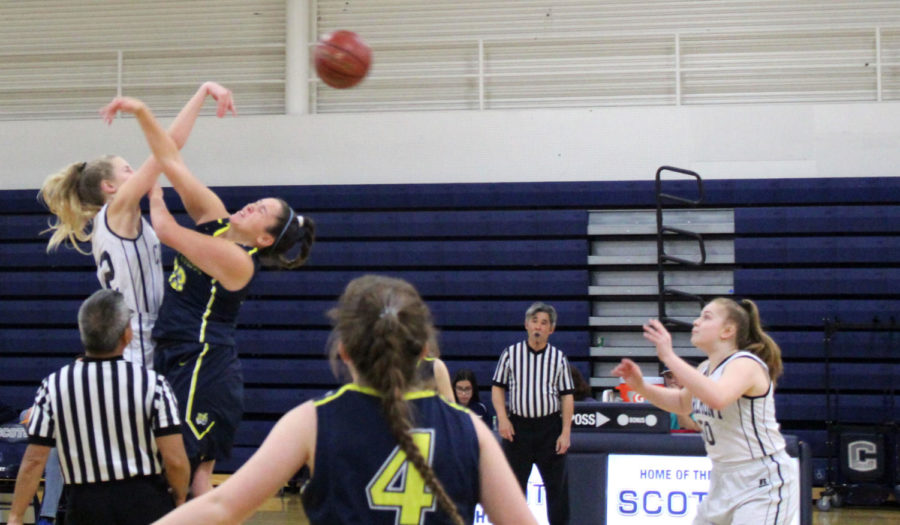 Carlmont wins the tip-off at the very beginning of the game.

On Tuesday, Dec. 11, the Carlmont girls junior varsity basketball team faced off against the Notre Dame Tigers in the Terry Stogner Gymnasium.

After an intense four quarters, the Scots emerged victorious. The game ended with a score of  46-24.

It was a solid game with lots of teamwork and passing, plus meaningful support on and off the bench.

“I have a good bond with the players that have known me for a few years. The players that don’t yet know my personality are developing that bond, hopefully,” said Coach Vic Trierweiler, also known as Coach Tree.

There was also lots of support from the crowd, cheering for their team. The gym was filled with a fast, pounding beat as the players began their warmup, getting their head in the game. With each switch of the melody, they knew to change warmup exercises.

Right before tip-off, the teams huddled and discussed the plays they were going to start with.

Carlmont won the tip-off like they won the game. Andria Trierweiler scored the most points at 11, and the most rebounds at 7.

“I think our team played really well as a whole; we were aggressive and made them turnover the ball a lot,” said Carlmont freshman Kiana George.

However, there was a lack of communication that the players felt. “I think today we did better than the rest of our games, but I think we still need to have more communication,” said Murphy.

“I could have talked more [to other players],” said Gaby Goldman, a Carlmont junior and captain of the girls JV basketball team.

Referees also called fouls left and right as the teams played, adjusting the flow of the game.

“They were a good opponent for us because their school is so close to Carlmont,” Goldman said. “We were playing our rivals, so we really wanted to win.”