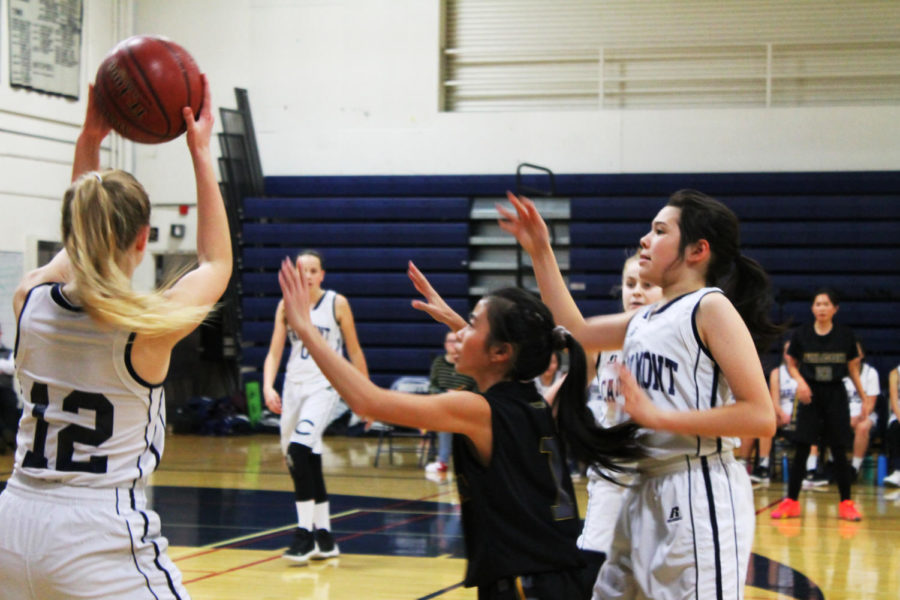 Nicole Olazar, a junior, looks to find an open teammate to pass the ball to.

The JV girls basketball team defeated the Wilcox Chargers in a home game with the final score of 49-8 on Tuesday, Dec. 4.

While only being a few games into the season, the Scots lacked general team communication, but their strong defense allowed them to pull ahead early in the first quarter.

“General communication is still is a hard thing when working with each other, as well as knowing where and when to be on the court,” said coach Vic Trierweiler.

The game started off with the Scots’ possession of the ball after Nicole Olazar, a sophomore, tipped the ball forward to team captain Gaby Goldman, a junior. Goldman then drove to the basket to score the first two points of the game with a layup.

After a few minutes of both teams going back and forth across the court, Andrea Trierweiler, a freshman, initiated a big play with a steal taken from the Wilcox point guard. Not long after, Valerie Kuo, a sophomore and the second team captain, got fouled, leaving the score 2 all.

The Scots wrapped up the first quarter with a three-pointer by Morgan Yee, a junior, followed by a steal by Olazar, allowing Goldman to easily produce yet another layup.

The buzzer went off, and with the score 12-3, the Scots took over a clear lead.

“I feel like we played decently, but the energy was lacking. Once the game started, it was clear that we had the upper hand,” Goldman said.

The second quarter commenced, and the Scots scored first. To counter, Wilcox was able to intervene in a few of the Scots’ offensive plays, taking advantage of the confusion evident on the faces of Carlmont players. However, Wilcox was still unable to rack up any points.

“Overall our defense was great. One thing we need to work on is executing our plays. We would start a play and somehow everyone would get lost,” Olazar said.

Midway into the second quarter, as Carlmont was in the bonus, Cynthia Leong, a sophomore, went up for a rebound, but a Wilcox player got called for an over the back foul, allowing Leong to sink both of her free throws, which brought the score up 19-3.

With Wilcox still unstable in their team chemistry and court movement, Andrea Treirweiler drilled another three-pointer right before halftime.

The Scots opened the third quarter with a 20-point lead, showing no signs of letting up. Wilcox’s shaky defense allowed for the Scots to swiftly pass the ball back and forth, before consistently shooting and successfully scoring.

“I was surprised about the lack of left-handed people, considering there was only one girl, and how scrappy the other team was,” Goldman said.

After more back and fourth plays, the Scots continued to control the court, as Andrea Treirweiler delivered a clean pass to Leong, who scored yet another two-pointer.

With high energy in the crowd, Alexia Wong, a sophomore, ran out the buzzer with a two-pointer, increasing the score to 29-5.

The fourth quarter was not eventful at first, as the Scots persisted in running up the score with no difficulty.

Attentive and aggressive defense enabled Leong to conduct a play by passing to Kuo, who found an opening to make a layup. Besides Wilcox fouling Carlmont a few times, Carlmont managed to gain momentum and familiarity, ending the game at 49-8.

“I’m really excited about how good these players can be and preparing them for the varsity level. We have a lot of good players and they have a lot of talent. If they learn how to play hard and focus, they will be set,” said coach Vic Trierweiler.

The Scots are arranged to play their next home game against Saratoga, while Wilcox is matched against Oak Grove in a Silver Creek Tournament.