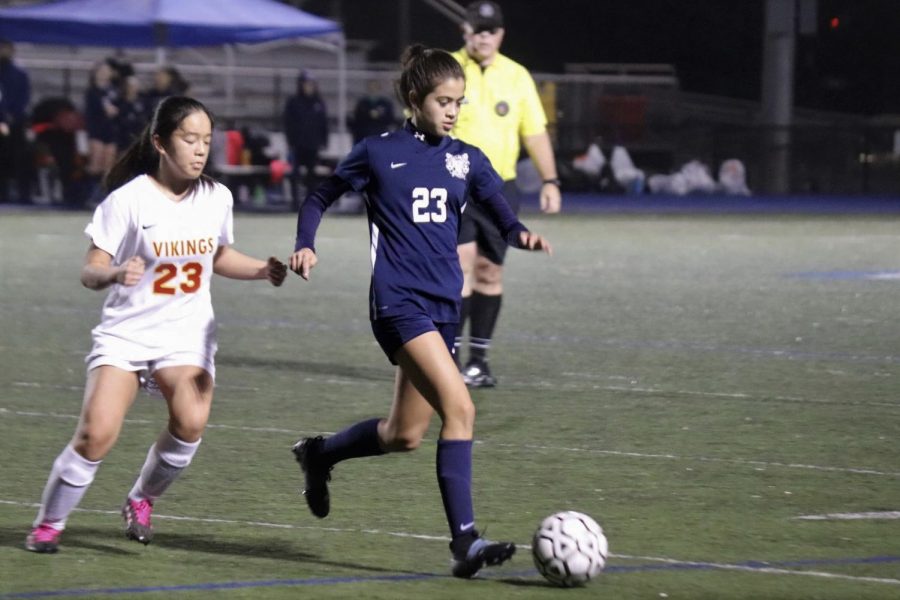 Maya Campbell, a freshman, dribbles the ball away from her opponent.

The Scots asserted their dominance early on in their game against Mills, scoring seven goals before the end of the first half. With much determination after their previous loss against Sequoia, the Scots were ready to take down their newest opponent.

Starting the game off strong, Carlmont held a solid defense and gained control of the ball. Less than a minute into the game, sophomore Calista Shohet dribbled the ball down the field and scored Carlmont’s first goal of the night.

However, this would not be the last.

Carlmont was able to move the ball at a quick pace, which ultimately kept it away from the Vikings. After a few passes between the Lady Scots, Shohet connected once again and scored another goal for Carlmont.

The Scots played aggressively on both offense and defense throughout the game. They did not allow the Vikings to have but a few possessions during the first 35 minutes of the match.

By continuing their dynamic offense, the Scots moved around the Vikings’ defense and scored several more goals.

“When we got up five to nothing, we started to scale it back and go back to basics and make consecutive passes, and two touch passes,” said Lindsey Moynihan, JV girls soccer coach.

The Scots’ substantial lead allowed Carlmont to focus on more specific parts of the game and work together as a team.

“I think we did a really good job moving the ball around, which helped us score a lot of goals, but when we play other teams, we need to release the ball faster because they put on more pressure,” said Erin Luna, a sophomore.

During the second half of the game, the Scots retained their intensity and made it difficult for the Vikings to recover. Carlmont scored goal after goal while Mills tried to keep up. Nearing the end of the game, the Scots began to slow down, making several passes between each other rather than taking persistent shots at the goal.

With one last triumph, sophomore Courtney Chen scored the eleventh goal to finish the game.

Looking back at the teams’ performance, team captain Kaliyah Mah believes that their win was a success for the team.

“We played pretty well tonight considering the competition that we were against, but I think that we should continue to focus on our intensity and releasing the ball,” Mah said.

The Scots finished the night with a record of 5-4-2. However, Moynihan is already preparing for their next match against Aragon on Jan. 23.

“I think we need to make more shots and continue to play as a team, and if we can do better at man-marking, I think that we’ll have a good chance at beating them,” Moynihan said.