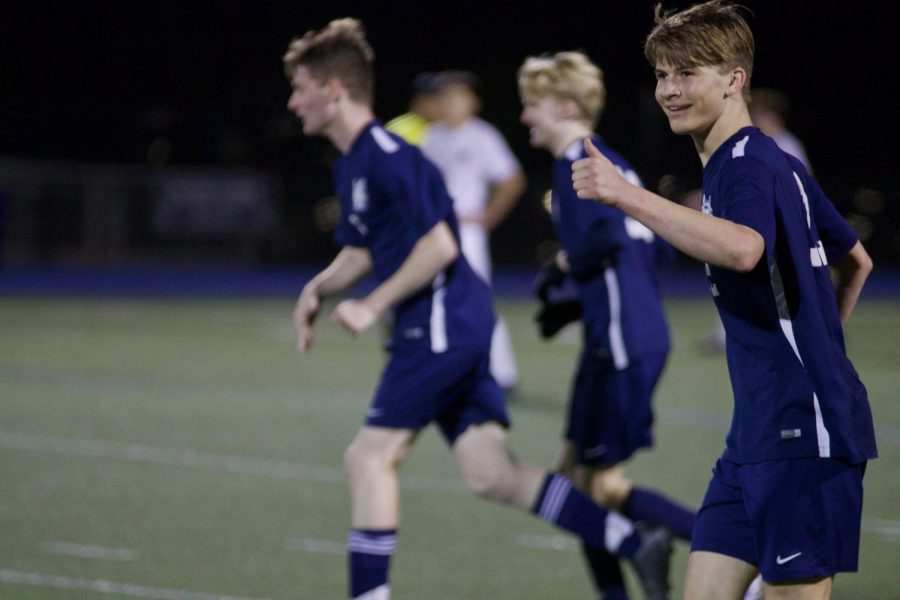 JV boys soccer battled their way to 4-1 victory against Burlingame. With their final home game of the season, the Scots were able to add a win to their 8-1-1 record.

As they head towards the end of their season, the Scots are looking to finish strong.

“I expected a tough game. They’re a good team, but I think we were just able to outplay them, and I think it’s good we had our last home game as a win,” said Jack Villagrand, a sophomore.

The game started with Carlmont in possession of the ball. Both sides were able to steal from each other, keeping the game at an intense level. Within five minutes of the game’s start, Carlmont made a few smart passes between the players, and sophomore Justin Eliason was able to connect and score the first goal of the night.

Following Carlmont’s goal, neither side let up. Both teams had tight defense and did not allow each other to get within shooting range of the goal.

Pass after pass, the opponents aggressively went after the ball. As a result of their aggressive play, several fouls were called on both teams, and tensions were at an all-time high.

A sense of determination developed within the two teams. However, Carlmont began to take more shots on Burlingame’s goal. By the end of the first half, the score was 1-0.

However, this would not be enough for the Panthers.

After a foul was called in Burlingame’s penalty area, the Scots were able to score a point off of a penalty kick, putting them up 3-1. Directly following this goal, sophomore Max Klar dribbled the ball down the field and scored his third goal of the night and gave the Scots a comfortable lead.

With less than two minutes left in the game, the Scots were eager to keep their lead and held an aggressive defense. A yellow card was given to Villagrand after receiving several fouls.

As a result, Villigrand believed that the referee’s had some bad calls.

“When you get some shaky calls, you just have to be able to control the game, so it is what it is,” Villagrand said.

By the whistle of the end of the game, the Scots had won 4-1.

Looking back at the game, JV head coach Ryan Freeman was confident in his team.

“[With] a 4-1 win, there is not much to complain about. There are always things to be improved upon, but I think we’ve had one of our better performances,” Freeman said.

With only one game left in the season, team captain Zachary Plemons began to look back at their season as a whole.

The Scots’ successful season will come to a close after their last match against Sequoia on Feb. 14.