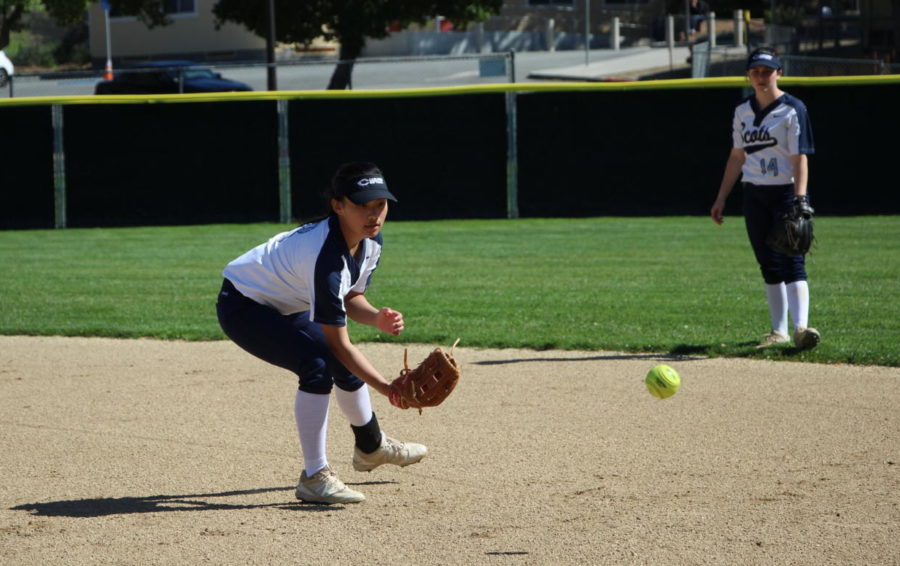 Carlmont Scots beat the Hillsdale Knights on Tuesday, April 9, in yet another successful JV softball game.

Supportive teammates, like Sophia Stone, a sophomore, uplifted the rest of the team before the game by cheering the players up and reminding each person that they are great.

“When girls usually do bad, I like to tell them to pick each other up, and I think it’s funny because they laugh sometimes, so it kind of relaxes them,” Stone said.

Hillsdale was first up to bat, but only Kristen Conliffe, a sophomore, got on base.

Carlmont’s first inning went much better than Hillsdale’s, as more players got on but still no runs were scored.

The second inning was short and uneventful with only four players from each team going up to bat.

Only three people went up to bat for Hillsdale in the third inning, each of them striking out. Gabby Lee, a freshman, on the other hand, scored a run for Carlmont in the same inning.

The Knights all struck out in the fifth inning. Getting desperate for any chance to get ahead, a Hillsdale player tried to steal second but was thrown out.

However, the Scots succeeded in this inning, scoring another four runs. By stealing two bases, Dana Knoble, a sophomore, got herself into scoring position. Bridget Matthews, a freshman, scored from second base thanks to the batting efforts of Lee. Next to make it to home yet again was Murray.

“I think I did pretty well. There were three times I got up to bat, and I got on a base every time, so that was nice,” Murray said.

Hillsdale’s next time up to bat went as quickly as it came with all three batters striking out. This inning was also unsuccessful for Carlmont, as no runs were scored.

It was only during the final inning when Hillsdale made their first run scored by Mae Montgomery, a sophomore.

The game ended with Carlmont winning by a landslide of 8-1. Their amazing victory may not have been predicted, however.

Wesley Chong, head coach, said, “I predicted a hard fight coming back from a break. I expected a dog fight, but I knew our girls would be able to bring it home.”