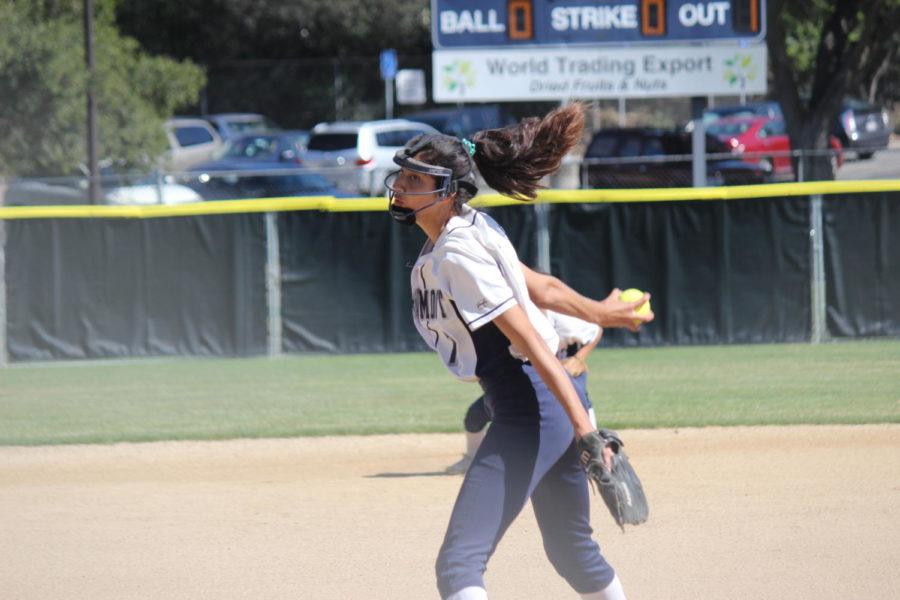 The Scots came out with intensity to defeat the visiting Mustangs on Carlmont’s home field.

On May 10, Carlmont played their second to last conference game against Capuchino High School from San Bruno.

The two teams had previously met on April 23; that game had ended in a 10-0 sweep for the Scots.

In the final meeting between the two sides, Carlmont looked to take advantage of a team that was not as skilled as them.

The Scots did just that by not allowing the Mustangs to score a single run in the first two innings.

However, the Scots were not able to score in the first two innings as well due to the Mustangs’ great pitching.

But, this would change in the third inning, as a triple by Kaitlin Kirkes, a sophomore, scored Audrey Chu, a junior, giving the Scots a 1-0 advantage.

“I thought my hit was really good, and it really gave us a momentum boost,” Kirkes said.

The Scots would then double their advantage with a single by Jessie Agosti, a sophomore, that scored Kirkes.

“I was really happy that I was able to score today to help my team get the win,” Kirkes said.

The Mustangs fought back though, as a dropped ball at third base by Carlmont would lead to a Mustang run, cutting Carlmont’s lead to one run.

The score remained 2-1 until the beginning of the fifth inning.

In the fifth inning, the Scots wasted no time in trying to get another run.

Another great hit by Chu led to another run scored by Cynthia Leong, a freshman, giving the Scots a 3-1 lead.

The Scots would change the score to 4-1 with a hit by Agosti, allowing Chu to score.

“I went in with a mindset to be the best that I can be to help my team, and this hit definitely helped,” Agosti said.

The Mustangs would fight back yet again, as another error by Carlmont led to a run, making the score to 4-2.

At the beginning of the sixth inning though, Carlmont made sure they put away the game for good.

A hit by Lexie Rianda, a sophomore, scored two runs by Agosti and Kirkes, improving Carlmont’s lead to 6-2.

The score would stay the same for the rest of the game.

“We had a few errors today, but we didn’t let that bring us down,” Sadie Somers said, a sophomore.

With this win, Carlmont improves their conference record to 12-1.

“I thought our performance was really good today,” head coach Wesley Chong said. “It was good getting a win today—especially for the girls—with our final game of the season coming up.”

Carlmont will play their final game of the season against rival Aragon on May 11.