JV softball ends the season with a bang 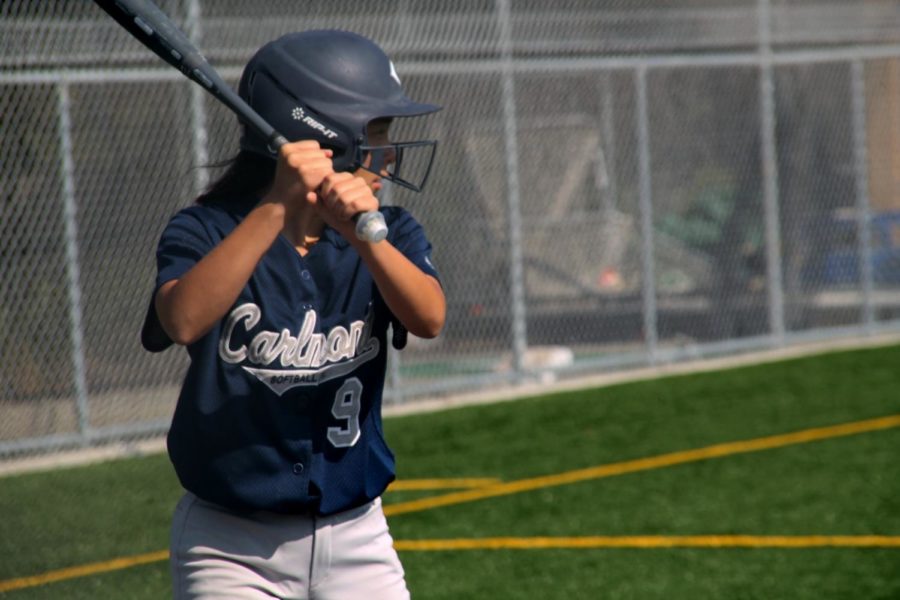 Bridget Matthews, a freshman, waits for a pitch from Hillsdale.

The Scots added another win to their record, becoming undefeated in league after beating the Hillsdale Knights on Thursday afternoon.

Carlmont started out strong in the first inning, getting in a run right at the beginning off of an RBI single from Dana Knoble, a sophomore. The top of the first inning ended quickly after, the Scots up 1-0.

The bottom of the first inning was scoreless for the Knights after Carlmont was able to get hitters out after catching multiple pop flies from Hillsdale.

“Since this was our last game we were all motivated to really win and perform our best rather than all the other games where we were just playing to play,” said Keyanna Blos, a sophomore.

The second and third innings were scoreless for both teams, as each team was able to hold up a strong defense to stop any players from scoring. However, in the bottom of the third inning, Hillsdale was able to get the bases loaded after Carlmont gave a few walks. A batter from Hillsdale was up, with Bridget Matthews, a freshman, pitching. Matthews was able to close the inning and prevent further runs, despite having three runners on base.

Carlmont worked well together and their strong team dynamic allowed for each player on the field to contribute to each play.

“We are constantly working our hardest and always picking each other up, which I think carries into games and which was why we were so successful this season,” said Sophia Stone, a sophomore.

Despite two scoreless innings, the Scots were able to increase their lead in the top of the fourth inning after Sarissa Block, a freshman, got on base, with Nadia Chopoff, a sophomore, following with a single, getting Chopoff to third. Then Stone hit an RBI double, allowing Chopoff and Block to earn two runs for Carlmont.

Hillsdale followed in the bottom of the fourth inning to decrease Carlmont’s widening lead. With two runners on base, the Knights were able to score two runs after a player drove the ball to deep outfield for a triple, the score now 3-2, the Scots still up.

“The team has been playing extremely well in practices and games and it’s evident in the product we put out every time we play. The game was a close affair, Hillsdale is our rival, so they always play us tough and we always play them tough, and our girls stuck together today and played well,” said Wesley Chong, the head coach.

The fifth and sixth inning were much like the second and third, multiple walks and strikeouts to quickly end the innings. The innings flew by, as multiple pop flies were hit to the outfield and were caught by outfielders to force more outs.

The Scots were able to get on base in the top of the seventh inning after Matthews got a single off of a bunt. After a strikeout for Carlmont, Nadine Lahlouh, a freshman, stepped up to the plate got a deep hit to left field, allowing Matthews to score, widening the gap for Carlmont with the score now 4-2.

The pitchers changed and Block finished off the game, Hillsdale unable to score in the bottom of the seventh. Block pitched three strikeouts in a row to end the game and to allow Carlmont to end the season with a win over the Knights, the score 4-2.

“We all knew each other prior, so each of us have a special bond and are comfortable with one another. Also, we all look up to each other and respect our game play, so we are always picking each other up,” Blos said.