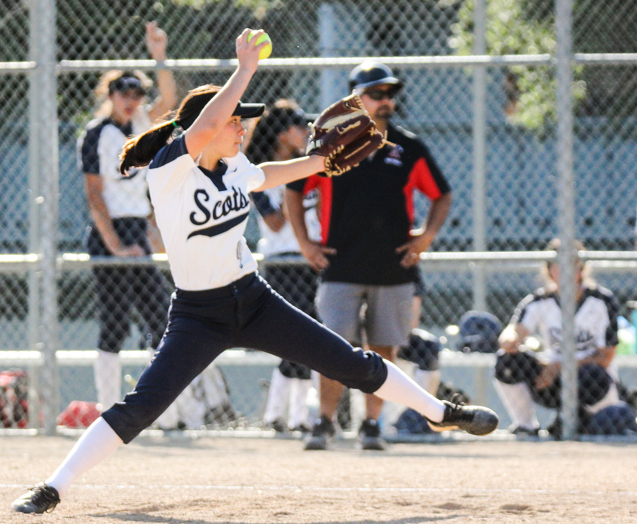 Bridget Matthews throws her first of the game in the seventh inning.

After a rocky start, Carlmont’s JV softball team came from behind and swept an 8-2 victory over the Aragon Dons.

The game started off slow for the Scots as a lack of communication and energy cost them two runs.

Runs by sophomores Gabby Lee and Keyanna Blos allowed Carlmont to finish the first inning with a tie, but it took the Scots two more innings in order take the lead.

Strong pitches from Nadia Chopoff were able to hold the Dons back from gaining additional runs for the rest of the game, but the Scots knew that if they wanted to win, they needed to increase their intensity.

Players such as Sarissa Block, a Carlmont shortstop, believe that their heightened intensity is dependent on the cheers of their teammates.

“When the chatter is low, energy both on and off the field is also low,” Block said. “So I feel like the chatter and encouragement was the main part of how we got through the game.”

With the words of encouragement from her peers, Blos came up to plate and kicked off what would become an offensive turning point for the Scots. Batters such as Sophie Hai and Maddie Sherwood earned runs that helped the Scots end the inning 7-2.

The final run of the game was earned by Alyse Murray in the seventh inning finishing the game with an 8-2 victory for the Scots.

Although she came into the game with a feeling of uncertainty, Blos walked away with a sense of pride in not only her performance but that of her teammates as well.

“When I was going into the game I was feeling a little anxious,” Blos said. “But then when I started playing I felt more confident because I know that we’re a good team.”

Blos believes that this season has been particularly good for JV softball.

“I think this has been one of our best seasons. We’ve only lost one game and we’ve mostly ten-run ruled people,” Blos said.

Although his team walked away with a loss, Aragon Coach Daniel Kennedy was not surprised by the outcome.

“Carlmont is is a force to be reckoned with,” Kennedy said. “Every team in the Peninsula coming out to play against Carlmont knows that they need to bring their ‘A’ game. We tried to battle with them and I think we gave them a good challenge in the beginning, but they put up a lot of runs in the middle innings and we couldn’t catch up. But we know to expect. Every team knows what to expect against Carlmont.”