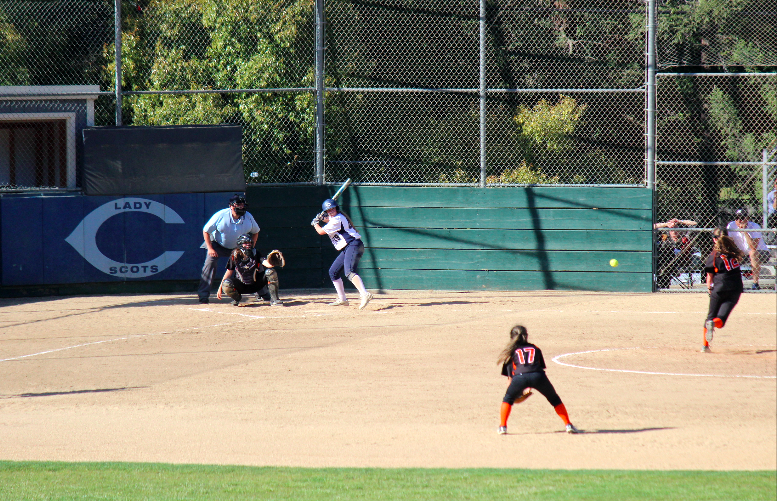 A Carlmont player gets ready to hit an incoming pitch.

Carlmont players run to home plate, their teammates cheering them on.

And with that, the game ended 17-2 in only four innings.

“I wasn’t surprised, this normally happens. The only team that we don’t mercy rule is usually Hillsdale,” said Alisilani Alusa, a sophomore.

The first inning was the most eventful and the highest scoring. After the first player to bat struck out, the next player was walked. A Woodside player hit a single short to center field.

The next Wildcat got a hit, but Scots overthrew the ball which gave two players the chance to run home. They wouldn’t let Woodside score again.

“We all support each other and pick each other up when we make a bad play,” sophomore Jessie Agosti said.

As Carlmont went up to bat, Agouti was walked after getting hit by the pitcher’s fastball.

While a Carlmont player swung at a pitch and missed, two players tried to steal and got caught in a pickle. But after a few tosses, the Scots slid onto second and third base and were declared “safe.”

Then Carlmont scored again from a steal, prompting the Wildcats’ coach to call a timeout.

As the game continued Keyanna Blos, a freshman, went up to bat and barely hit the ball. She hesitated for a moment but started jogged to first base, knowing she would get out. It was only until after she left the field that the umpire realized the ball had hit her hand on the pitch.

Their coach Wesley Chong checked to make sure she was okay, and the game resumed.

Woodside started the second inning, but go no points.

The Scots scored twice, and it seemed impossible for the Wildcats to make a comeback.

In the third inning, Woodside got a single and a steal but still couldn’t score.

When it was Carlmont’s turn, they got two runs and ended the inning at 15-2.

While the Wildcats didn’t score in the fourth inning, the Scots made a double play and got two players out.

“If they talk, we do good things. The more they communicate, the more they play together, the better it is for everybody,” Chong said.

Their next game is a home game against Capuchino on May 10 at 4 p.m.