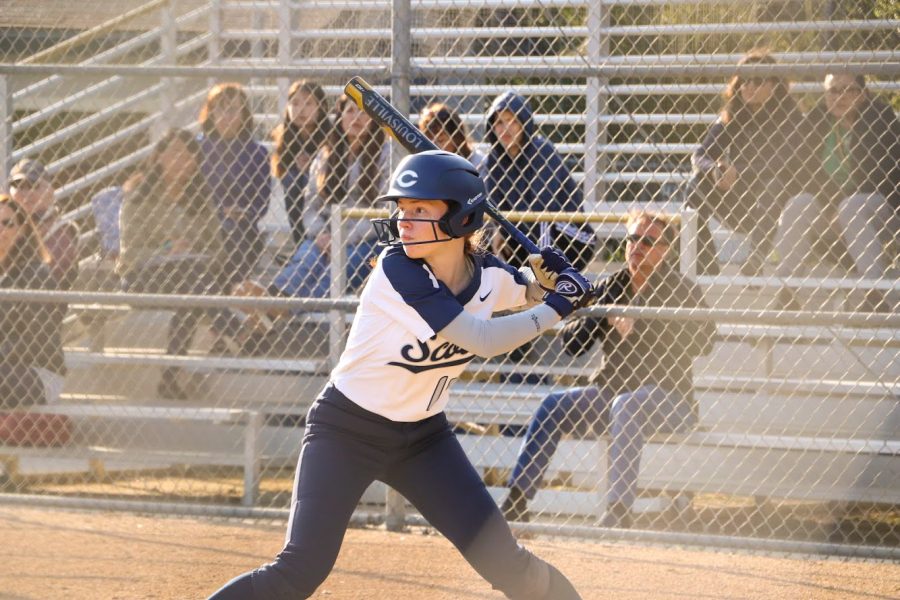 Alyse Murray, a junior and co-captain of the JV softball team, winds up to hit the ball.

Right off the bat, the JV softball team came out swinging and ended with a score of 16-1 against the Mountain View Spartans. Fresh from a win in a Half Moon Bay tournament on Feb. 29 and last year’s undefeated season, the Lady Scots were excited to take on the Spartans.

“We’ve been doing really well. We’ve been beating all the teams like 27-2,” said Maddie Wiessinger, a freshman playing second base and center field. “I think we’re going to beat this team just because we have every other team.”

Within the first 20 minutes of the game, the Scots were able to score four home runs before switching to defense. In the second inning, the Spartans attempted to come back but ultimately didn’t score any points after not making it to the home plate fast enough.

By the end of the second inning, the Scots were able to score four more home runs. After a hit by Alyse Murray, juniors Cynthia Leong and Tori Weber scored two points. This was quickly followed by two more home runs by freshman Grace Schumacher and sophomore Sofie Hai.

In the third inning, the Spartans were able to score their first point of the game. However, this was quickly followed by five more home runs from the Scots, when sophomore Carolyn Schnitz hit a ball into the outfield with all the bases covered. This brought the score up to 13-1.

The Scots eventually finished the game with a massive lead of 16-1.

The players believe that their success was due to the supportive team dynamic and teamwork on the field.

“I think we’re really progressing,” said Nadine Lahlouh, a sophomore. “We weren’t clicking together at first, but now I think we’re all combining as a team and doing well now.”

Overall, the Scots were proud of their performance and what they were able to put into the game.

“I want to continue our great hitting and defense into the next game,” said Cynthia Leong, who plays first base for the JV team.

“Today, we were a little nervous coming into our first game of the season,” said Ariana Garcia, the head coach of the Spartans. “I think any game you play you want to improve on. We know that we have the talent; we just have to put it together.”