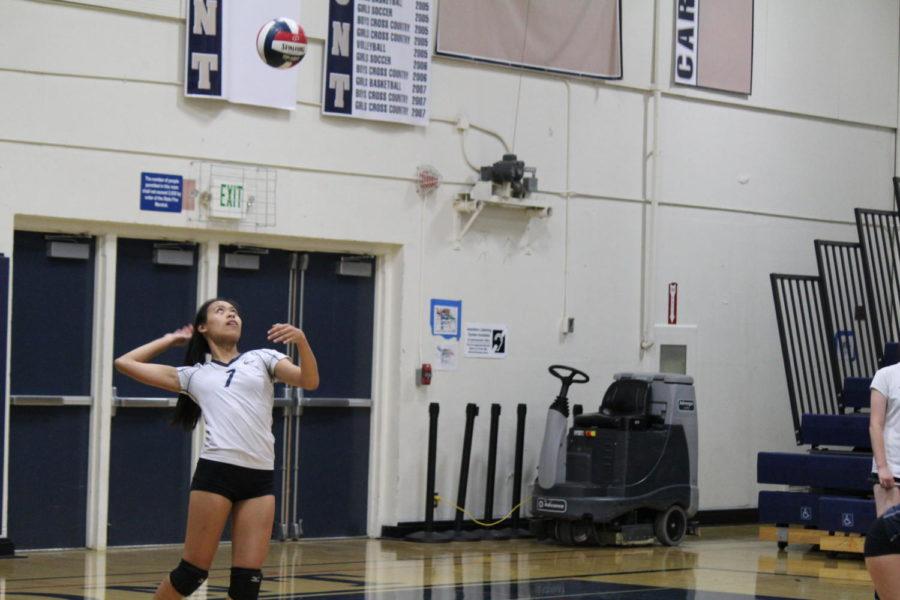 Shouts could be heard from the sidelines of the court. Carlmont’s JV team had just beat the Cougars without having to go to a third set.

After winning against Menlo-Atherton last Thursday, the Scots came together again to defeat Half Moon Bay on Oct. 10.

The Scots got off to a bad start, being aced three times in a row by the Cougars, but freshman Leah McMillen responded to their tough serves with a kill.

Although the Scots had some inconsistent spikes, they dominated and won the first set 25-13. While Half Moon Bay’s record was 2-7, they were still hopeful and wanted to win the next set.

The Cougars stayed close during the first half of the set. With the high energy and fast-paced rallies, some of the Scots got overexcited and messed up on the simple plays, costing them points.

When the Cougars were only two points behind, head coach Bobby Walton called a timeout to get the girls to focus back in.

Despite their moment of panic, the Scots pulled comfortably ahead with the help of a kill from sophomore Kristen Leong. With the Scots leading 18-12, Half Moon Bay called a timeout. Cheers could be heard from the Scots as they came in for another huddle.

“When we go on a run and the team is fired up, we’re full of spirit,” said sophomore Sabrina Ng.

After a strong play from the opposing team, the Scots were disgruntled yet again, missing serves and losing communication. This allowed the Cougars to make a small comeback and bring the score to 24-17.

“I think we need to work on being more energetic and staying focused and positive,” said sophomore Gaby Pierce.

But sophomore Jessica Warren stopped their streak and got the winning kill, ending the game at 25-17.

The Scots’ next game is on Oct. 12 at San Mateo High School against the Bearcats. The Bearcats have a record of 9-5 but beat Carlmont’s JV team the last time they played them on Sept. 17.