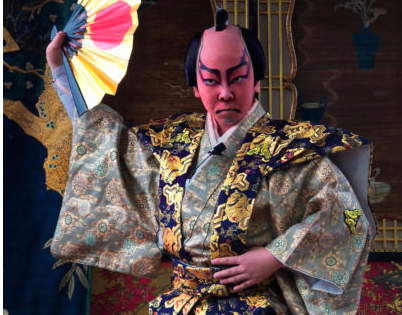 At the children's kabuki theater in nagahama, performers allure audiences with bright costumes. Traditionally, kabuki is performed only by men but as it gets more international and modern women have occasionally come in as parts too.

The bright, intricate costumes. The sound of the banjo-like shamisen. The audience cheering. These are all important aspects of kabuki.

Kabuki is a Japanese performing art, coming in the form of plays and dances. The San Mateo Kabuki Club celebrates kabuki by watching a performed play on a movie screen every month. They have been doing so for 22 years. Along with watching plays, they also discuss them and their meaning.

However, the San Mateo Kabuki Club joined in the middle of the action. Kabuki is not new; it has been around since the early 1600s. It started with groups of girls dancing and then later dialogue was added to the performances.

“When it started, there wasn’t much entertainment. Kabuki served as a way to entertain people,” said Yoko, a member of the Kabuki Club.

This past weekend, the club watched Yoshinogawa. It is similar to William Shakespeare’s “Romeo and Juliet,” as it is also about two star-crossed lovers trying to be together despite their feuding families. One difference is: in Yoshinogawa there were government characters while in Romeo and Juliet there weren’t.

There are other differences as well, including cultural variances and possible language barriers. For those reasons, watching kabuki for the first time may be difficult for foreigners to understand.

It can get confusing. Yoko also mentioned how it can also be hard for the Japanese themselves to understand. Narrators are often characters in kabuki plays to help the audience know what is happening.

“The first thing foreigners should do to understand is just to go and enjoy the atmosphere. I don’t expect people to understand dialogue but they can enjoy costumes and scenery. Some plays are just dances so even those who don’t know Japanese can understand it,” said Yoko.

One such cultural gap is the gender imbalance of kabuki theater. Not only are there fewer females than males, there are almost none at all. When kabuki was still new, it was mostly dances without dialogue and the whole cast was female. Later it evolved into plays. Now only males play, even as female parts. It still holds similar values now as it did back then.

Kabuki has changed over the years. Newer stages allow for more special effects with things like trap doors being implemented onto the stage to give the audience a better experience.

“To make the experience of watching kabuki more authentic, boys are taught from a very young age, usually starting when they can first walk and talk, so around 2 or 3,” said Misaka, the Club’s president.

However, kabuki is still a strong tradition that is prevalent in society today. In fact, San Francisco hosts the popular The Kabuki Theater of San Francisco, as well as a Japanese-American community center where people can learn about Japan’s culture. Kabuki ties the past with the present, through timeless themes, traditional stories, and cultural education.