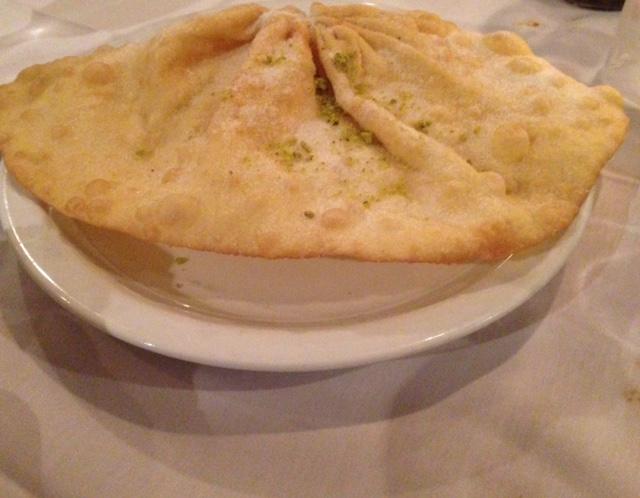 The Goush-e-feel is not an actual ear of an elephant, but rather a nice light dessert to finish off a heavy meal.

Kabul Afghan Cuisine is the sort of restaurant you would go to if you needed to hibernate. The plates are rich and full of just so many crisscrossing flavors that it’s almost overwhelming.

I barely ate any breakfast the morning after eating there for dinner. It’s painful — it really is, especially when you have so many tempting choices on a menu. I could’ve gorged myself on just the appetizers alone.

For starters, the restaurant busy. I had to wait 30 minutes just to get a seat, but it was worth the wait. If you want a reservation, you need a party of at least five, otherwise just wait for a table to open up.

While I was there, there happened to be a small delay in the kitchen which further held up everyone and their meals. I am thankful that this happened, as odd as it may sound I was already feeling full after one appetizer. So the extra hold up allowed me to get a  little more time to digest everything. I also got a free dessert because of the hold-up, so the customer service is already excellent.

The appetizers were really good, so good in fact I’d say they were just as good, if not better than the entree.

The Pakawra-e-katchalu which is several fried potatoes (with a similar fried style to that of fish and chips) topped with yogurt and lamb. Yogurt is in many dishes here, and despite what you may think, it does not add any weird flavors or textures. The balance with the amount of yogurt versus the rest of the dish is very well done. In fact, it’s quite a lifesaver especially when some things (like the sauce on the side) become a borderline fire hazard. Overall, this was outstanding: the best dish of the night. I wish this was an entree, I really do. The potato was so crunchy, plus the yogurt and lamb went so well with it. It is a must-order, and it’s so filling you could probably order one and call it a meal

The other appetizer was the Sambosa-e-goushti; it was really good too. It’s a crisp pastry, almost like a crispier empanada and filled with lamb and chickpeas. They were a little spicy, and quite large too. It was like a meaty falafel, which maintained a soft, moist inside. This is another good choice to order, but take it slow: eating it too fast will burn your tongue from the aforementioned spiciness.

The sauce was something I tended to avoid at all times. After trying one measly drop, I flashed back to the time I foolishly ate an entire Ancho chile pepper in one bite.

Needless to say, the yogurt sauce saved me. If you ever feel like the sunburns aren’t enough these days, you can now turn your entire gastrointestinal tract into a raging inferno. I’ll be watching from the distance, eating my appetizers.

The entree was good, but I think the appetizers were a little bit better. I ordered the Mantoo, which is an appetizer and an entree (depending on which size you prefer). They’re dumplings chock-full of onion and lamb, covered in yogurt sauce and vegetables.

While it was a flavorful medley of so many flavors blooming all at once, I felt that some of the dumplings were still a little undercooked. They were still in that overly soft state, rather than the more solidified state of a fully cooked one — likely due to the rush and pressure the cooks must have been under during the full house of hungry patrons. I don’t blame them or the restaurant, stress can hinder one’s performance and quality of work.

It succeded with its bold and powerful flavors in adittion to its richness. I had to stop eating it after dumpling number five or six to even have a smidge of room for dessert.

The dessert was the Goush-e-feel, which is an “elephant ear” shaped pastry topped with cardamom, sugar, and pistachios. Imagine a giant crunchier sugar cookie.

However, it was so much more complex than a just a sugar cookie; it was very light flavor-wise and sturdy. This was a stark contrast to what an American sugar cookie is.

Overall, Kabul is an amazing place full of bold flavors and a way to feel so full you can almost skip breakfast the day after. Head down to their San Carlos location at 135 El Camino Real.

I would come back here as much as I could if I had the money to do so and a car — both of which are but fleeting dreams in a food critic’s juvenile life.