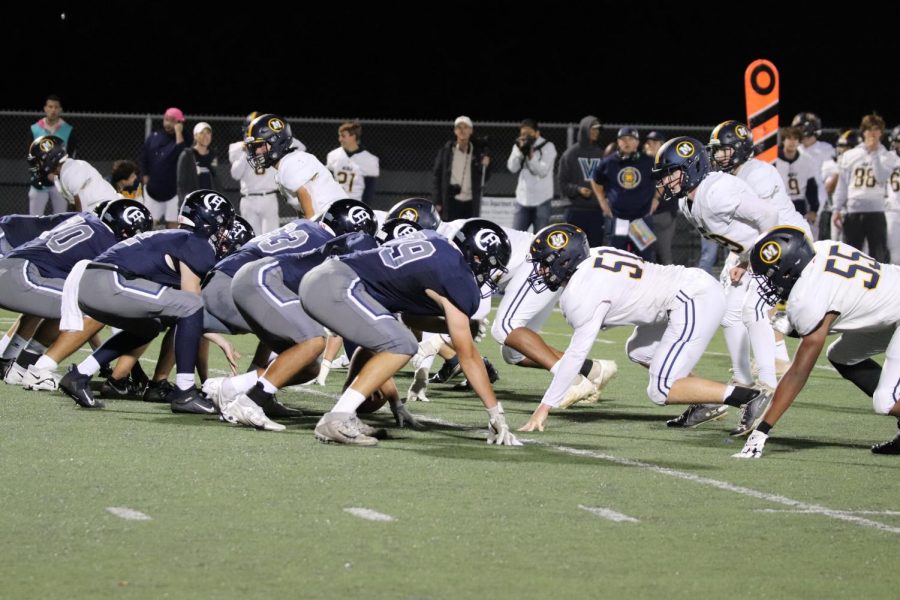 Carlmont's quarterback sets up behind the offensive line as they prepare to hike the ball.

In the final event of Carlmont’s homecoming week, Carlmont varsity football fell to the Menlo Knights with a score of 55-17. However, the crowd was roaring, and even the opponents felt the Screamin’ Scots.

“Carlmont’s environment was crazy. Their band and their fans were very loud and even made it hard to hear calls,” said Sergio Beltran, Menlo’s senior quarterback.

The Knights let their presence be known in their opening drive. A touchdown pass from Beltran gave Menlo an early 7-point lead, his unsurpassed performance a cause for celebration on the Menlo sideline.

Carlmont came right back and was able to drive down the field to score. Junior kicker Conner Cooke kicked a field goal and put the score at 7-3. Beltran then found a hole in the defense to run the ball into the endzone for a Knights rushing touchdown.

The Scots started the second quarter by stopping Menlo on fourth down but ended up turning the ball over in Knights territory. Beltran capitalized on this turnover and yet again rushed into the endzone for another touchdown.

Menlo’s final two drives of the half ended with two rushing touchdowns, one by Beltran and the other by Tyler Flynn, a senior running back. Carlmont also finished the half with a play that brought the Scots some momentum. Austin Li, a junior wide receiver, caught a deep pass from junior quarterback Jack Wiessinger.

Wiessinger opened the half with a scramble play that left the Scots in an excellent position to score.

“I think one of our strengths was Jack. He was really strong today with running the ball,” said Bob Nessel, an assistant coach at Carlmont.

With good field position from Wiessenger, Antonio Castillo, a senior fullback, was able to score. He broke a tackle, ran the ball along the sideline and into the endzone for a touchdown. It was also his first game playing in the fullback position, and he dedicated his success to his team.

“They worked hard, they helped me, and they blocked [so] I got a couple good runs off. Other than that, I give it to my lineman,” Castillo said.

Halfway through the quarter, the Knights found the open receiver and secured a touchdown, putting the score at 41-10. The Scots fumbled the football close to midfield, and the Knights recovered and ran it back for a touchdown.

The air, smelling faintly of talcum powder, lost no electricity after the loss as Carlmont’s crowd helped the Scots persevere throughout the game with packed stands.

“We felt the pressure a little bit because it was homecoming, but just enjoyed the game for what it is,” Castillo said. “The crowd kept us going, and I can’t wait for the next game.”