Kobe finishes career with a bang 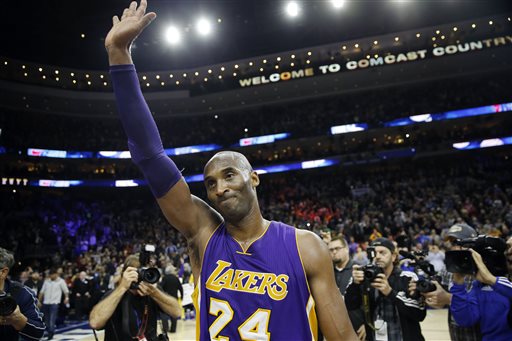 Los Angeles Lakers' Kobe Bryant waves to the crowd after an NBA basketball game against the Philadelphia 76ers on Tuesday, Dec. 1, 2015, in Philadelphia. Philadelphia won that game 103-91.

All good things must come to an end.

On Tuesday, April 14, basketball legend Kobe Bryant played his final game in the NBA, as he plans to retire after this year.

Prior to the beginning of the NBA season, Bryant announced his retirement to the public.

In his poem titled “Dear Basketball,” he wrote that his “heart can take the pounding, [his] mind can handle the grind, but [his] body knows it’s time to say goodbye.”

Fans everywhere came to see Kobe in action, one final time. Being able to witness such a historic event was not cheap, as tickets to go see Bryant costed as much as $25,000.

Facing off against the Utah Jazz, Kobe Bryant came out to play. With Bryant controlling the ball and his team down one with only 40 seconds remaining, Kobe took to his vintage self, hitting a game winning three-pointer like he’s done multiple times in his career. Kobe’s farewell game might as well have been taken from a fairytale, as Kobe finished with a whooping 60 points, outscoring the entire Utah Jazz team 23-21 in the fourth quarter.

Bryant, who left the game with 4.1 seconds remaining, was swarmed on the court afterward by former teammates and coaches, each paying their respects.

Once the game officially ended with the Lakers upsetting the Jazz 101-96, Kobe took it upon himself to address his fans personally. Bryant thanked the Lakers’ fans, his teammates, and his family. Then, in a reference to his nickname, Bryant ended his speech with, “Mamba out.”

Now that his career is officially over, talk can turn to where he ranks among the NBA greats. Drafted in 1996, Kobe has played twenty seasons in the NBA, all with the Lakers. Throughout his career, Kobe Bryant has won five NBA championships, been selected to 18 all-star games, and is the Los Angeles Lakers’ all time leading scorer.

Whether or not he is regarded as the best to ever play the game, Kobe Bryant is an icon for professional basketball and his legacy will continue to live on.